The UESPWiki – Your source for The Elder Scrolls since 1995
< Lore: People: T(Redirected from Lore:Warhaft)
Jump to: navigation, search

He had a wife.[3] And later a daughter,[3] named Laretha Warhaft who would go on to become a Commander within the Imperial Legion in adulthood.[UOL 1] Additionally, he took on a ward, who would become known as the Eternal Champion to later history.[3][nb 2] His well off family lived in a country village with their own house estate.[3]

When Talin Warhaft was just beginning his career as a Warrior Spellsword, and had just celebrated his 16th spring, he met another young Spellsword, a human who called himself Marten the Blade. They became friends very quickly. Despite their youth, the two dreamed of fame and fortune.[4]

During an ambush by bandits, Warhaft became wounded, Marten utilized a spell that changed his outward appearance into that of the bandit leader, then, he took advantage of the immediate confusion the bandits were facing to lure them away from Talin's wounded body.[4]

In one memorable tale of Talin's youth, Warhaft visited a primitive island where a young child was sacrificed once a year to appease Arius, the God of Fire. Whenever the natives neglected the sacrifice, the island volcano would erupt, killing hundreds of villagers.[3]

Marten and Talin traveled together for many years, but some time in Marten had a son. Not wanting his boy to grow up without seeing his father, Marten abandoned his travels and took the mother as a wife.[4] 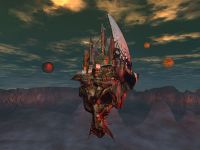 Later in life, Talin Warhaft won a position within the Imperial Guard, an elite unit of the Imperial Legion,[5] known as the greatest warrior-mages of Tamriel,[6] the Guard is charged with the sole task of ensuring the safety and defense of the Emperor and various of his direct representatives in the provinces.[5] The Testing Ground of Battlespire was utilized to examine those who wish to join the Imperial Guard. Recruits of this Imperial Battle College were known as Potentials and were usually identified as preteens. These Potentials learn about magic, the art of magical and martial warfare, as well as contemporary studies. Every year there is a Potentials Battle Tourney, where the first and second place winners are allowed to enter the Testing Ground.[7][8][6] Only those who could prove themselves by successfully mastering the challenges of Battlespire were chosen for the Emperor's Imperial Guard.[6][8] An Imperial Guard is not to be confused a member of the: "Blades Guard,"[9] who also served under the Imperial Guard umbrella[10] in a more honorary role as the bodyguards of Dragonborn Emperors.[11]

Eventually, Talin Warhaft would be appointed leader of the entire Imperial Guard under the title of General.[1][2] Warhaft formed a close-knit team, supposedly capable of annihilating any threat to the Emperor.[4]

Warhaft once fought at the Battle of Borim Valley, where his men had routed the enemy. They would have captured all their opponents if not for the brave sacrifice of a young sergeant on the opposing side, who held a pass long enough for his men to retreat to safety.[3]

In 3E 389, General Warhaft attended Mid Year's festival[nb 3] in the Emperor's banquet hall (two and half months before the Imperial Simulacrum would begin). The ghost of Elder Ria Silmane would retroactively declare that this event was where evil took form in her master:[2] Imperial Battlemage of Tamriel, Jagar Tharn; which holds at least some truth, it was here where General Warhaft would regale an anecdote to the Crown Princess Ariella Septim, Talin recounted the tale from his youth of when his friend, Marten the Blade, used a transmorph spell to change his own appearance into that of another, so that Marten may trick a group of bandits into thinking he was their leader. It was this anecdote that inspired a disgruntled Jagar Tharn to steal the appearance of his Emperor, and nab Septim's place on the Dragon Throne.[4]

Then came the 1st of Hearthfire 3E 389. It was in the Imperial Training Hall, the place where Talin and the Guards worked on their combat tactics, that an ornate seal appeared on the floor, cast by Tharn. Tharn then summoned the Emperor and his Guard, declaring he had found something strange and heard rumors of treachery. When the Emperor arrived, Tharn cast the spell. The seal flashed once, then surrounded the Emperor and his Guard with a wall of flames. They tried in vain to break the magic barrier. Imprisoned by the seal, they could only watch helplessly as Tharn transformed into the Emperor's appearance. Tharn then summoned demonic beings, who also transformed themselves to take the form of Talin and the other guards. An astonished Emperor and his Guard stared out, as their look-alikes stood there before them like a reflection in a mirror. Tharn explained to the Emperor that time passed more slowly in the dimension where he would dispatch them. By the time they would eventually die several generations would have grown up on Tamriel, and for them the glorious reign of Uriel Septim would be centuries old. Even if the magic of the Amulet of Kings alerted the Elder Council, they could not know for whom the bell tolled. Nevertheless, Tharn assured the Emperor that he would take care of everything. In a few moments, the Emperor and his Imperial Guards would be sucked out of this world and propelled into another dimension, chosen by the Imperial Battlemage.[4]

Nothing of Talin's personal experiences within the dimensional prison is known. But we can extrapolate based on Uriel's public account and assume something of similar note happened to Warhaft. The Emperor said he remembered nothing of the dimension but an endless sequence of waking and sleeping nightmares, during that time he believed himself to be dreaming, and had no notion of passage of time. On the whole, Uriel seemed not so much unwilling, as incapable of describing the experience. But it is clear that it changed him. The Emperor also became conservative and pessimistic, where the policies of his early life were markedly bold, even rash. Uriel accounts for this change as a reaction to and revulsion for the early teachings and counsel of Jagar Tharn. However, Uriel's exile in Oblivion also clearly drained and wasted him in body and spirit, though his mind retained the shrewd cunning and flexibility of his youth.[12]

The Emperor and his Guard were eventually rescued in 3E 399 by Talin's ward, and Talin told his child that they had earned his deepest respect, and stepped aside to allow the Emperor to bequeath them: Eternal Champion of the Empire.[13]

Talin Warhaft and the Eternal Champion both continued to investigate "Tharn's aborted master plan,"[UOL 2] a phrase which would later be called "Tharnatos," a word that seems to define and comprise: the plans, actions, and players involved in Tharn's coup.[UOL 3] Though, little of great relevance regarding the master plan was ever uncovered.[UOL 2] It was later reported that the dimension Uriel and his Guard had been sent to, had actually been created by Jagar Tharn, seemingly information discovered during the inquiry.[14] General Warhaft's investigation eventually brought him to Morrowind, suspecting the factions within had some role to play in the Tharnatos conspiracy.[UOL 3] It was also reported that Jagar Tharn's known associates (those who were not executed), became imprisoned in The Rose, a Black Marsh facility, supposedly the most secure and notorious prison of the time! This prison featured a notable prison break circa 3E 432, with some of the worst murderers, thieves, and political revolutionaries escaping into the swamps.[15]

Sometime after the Imperial Simulacrum, Lady Allena Benoch was appointed head of the Emperor's Imperial Guard.[16]

Circa 3E 433, General Warhaft commissioned the writing and publication of the Manuals of Arms and Armor to serve as standard guides to all officers of the Imperial Legion regarding their standard equipment.[17][18]

Talin Warhaft's status succeeding these events (and the fall of the Septim Dynasty) remains unknown.[nb 4]