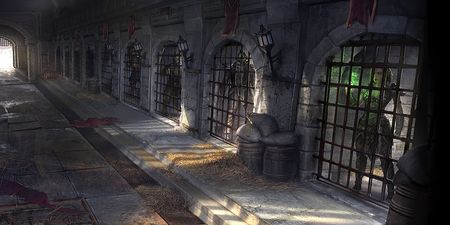 Solo Arena is an arena mode in The Elder Scrolls: Legends. Solo Arena consists of several consecutive matches against the AI. Rather than using one of your already-constructed decks, you choose one of three offered classes to play as, and will be given a selection of cards within that class to build a 30-card deck. The deck will last only through the remainder of the arena.

Rewards from the Arena are greater than the rewards earned in Play modes, but lower than Versus and Chaos Arena. They may include legendary cards and multiple card packs. 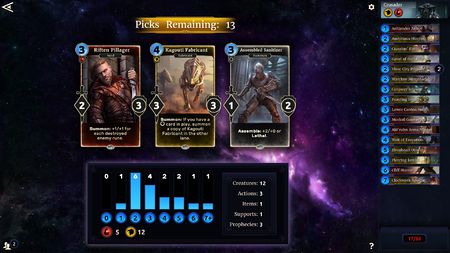 In Solo Arena, you face off against eight AI opponents and a final boss. The run will be over after you lost 3 times or if you managed to defeat the boss.

When you enter the Arena, you will see a screen of eight small counters, with the image and class of the corresponding enemy displayed, and a large counter showing the avatar but not class of the boss. To the left of your name will be your Solo Arena rank and win counter, and to the right your loss counter. Battles in Solo Arena are much the same as any other; you select a counter and hit play. Every time you win a match, the enemy's corresponding counter is replaced by an image of a coin, and another win is added to your win counter. When you win, you are given one more choice between one of three cards. Every time you lose, the enemy's counter will display a red rune, and the same rune is added to your loss counter. Once you defeat all eight non-boss opponents, the class of the boss will be revealed and you will be able to battle it. You will receive an Adoring Fan card for defeating an Arena boss for the first time. 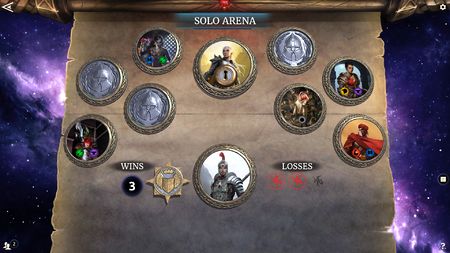 As with the Versus Arena and Chaos Arena, every time you earn a rank, you earn a promotion reward of fifty gold. You earn a rank every time you defeat a certain amount of opponents. Only seven wins are needed to rank up until you reach Hero. After this, the requirement to rank up is nine wins until you achieve the Grand Champion rank. Solo Arena has an independent ranking systems of the other Arenas, though the progression and naming scheme are identical.

Upon promotion to Grand Champion for the first time (including Versus Arena), you will receive a premium Adoring Fan.

Each opponent, including the boss, is randomly selected from a predetermined pool based on your elo score. Each opponent has a unique deck, a title, and follows a specific theme. There is a 50% chance that one of the non-boss opponents will be a feature match each run. These are opponents that begin the match with a unique scenario, introduction text, and announcer dialogue, but no special lanes or random scenarios can be present. Each feature match can be defeated only once and will then be removed from the eligible pool of opponents.

For a list of each opponent and their decklists, see Solo Arena Opponents.

Contrary to the information provided by the game, the opponents are not selected based on your rank. Every player has a hidden elo score which can decrease and increase depending on the amount of wins during a run. This does not follow the traditional elo rating system used by other games, because the Arena matches you against an AI. Your first run starts with an elo of 1200 and will change following the table below. The minimum is an elo of 800 the maximum of 2000. You will not lose elo from losing games by itself. The elo score will not be adjusted during a run, only after the run is finished.

At the start of a run, your own current elo score is used to determine the opponents that are eligible to encounter. Each opponent has their own elo score that will be compared to your own elo as shown in the following table. The opponent elo scores are listed here. So as an example: if you have an elo of 1200, you will face two weak opponents with an elo between 700 and 900 (-500/-300) and two strong opponents with an elo between 1100 and 1300 (-100/100). Bosses and feature matches are selected the same way as other opponents.

The final boss is selected from the same pool as the other 8 opponents, but is made more challenging due to the addition of one of the following Supports in play on their side.

The boss battle and feature matches will always have their own scenario without any elo modifiers. All other battles have the following chance to get a scenario. There is no way to determine what opponent is assigned which slot as they are randomly distributed over the opponents.

Only the first Solo Arena run will have predetermined slots with Scenarios and Special Lanes (although those are still randomly chosen).

The following lanes can replace or found in conjunction with the Field and/or the Shadow lane[verification needed — What's the chance?]. For more information about Lanes, see here.

The following is a list of quotes from the Arena Announcer in the Solo Arena. He is voiced by Wes Johnson, the same voice actor as its Oblivion counterpart.