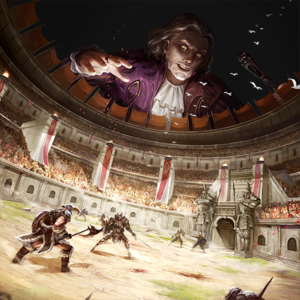 Chaos Arena was a monthly arena event in The Elder Scrolls Legends. It was centered around Sheogorath and featured an updated temporary Versus Arena. All players logging in during the event got a free core set card pack after the event. Standard modes were still available during the event.

The first Chaos Arena took place from December 14, 2016 until December 20, 2016, and was popular enough that it was made a monthly event. The Chaos Arena was discontinued during the switch to the Sparkypants client and has not returned.

Chaos Arena has the same rules Versus Arena with the exception that every match features one or two special scenarios or lanes. The avatar art is humorously edited, and the lanes feature art specific to the type of lane, as well. On November 17, Wabbajack was introduced as a new feature. You can use Wabbajack up to five times during a draft to transform your three card picks into three new random cards. The Wabbajacked cards are the same rarity as the original picks, but are not restricted by your chosen class.

Each match has a chance to have one of the following scenarios.

The one or two of the following lanes can replace or found in conjunction with the Field and/or the Shadow lane. For more information about Lanes, see here.

The following is a list of quotes from Sheogorath in the Chaos Arena. He is voiced by Wes Johnson, the same voice actor as its Shivering Isles counterpart.