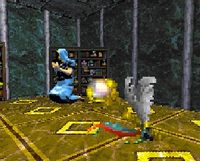 The item is very important to the Temple faithful 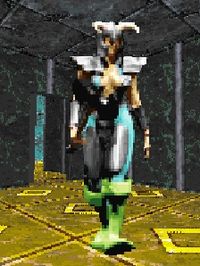 The monks are not happy with your intrusion

The noble's contact, awaiting your arrival in a tavern

"If you could, (player's first name), I am in need of assistance from someone I know isn't a complete buffoon. I sent another mercenary out to deliver a small package to a temple, nothing of great value, but damned if it wasn't stolen. Well, at least this idiotic hired hand paid attention to where the bandits went. Do you think you could help me out and get my parcel back?"

"Thank you in advance, (player's first name). Now, the complications. The bandits sold the (religious item) to a temple, (temple) in (first city). It apparently has some sort of religious significance to them. In order to avoid embarrassment, I need you to steal the (religious item) out of the temple and get it to (contact's name). You'll find (him/her) at (tavern) in (second city). The (religious item) must be in the moronic (contact's name)'s hands within (first time limit) days; and you must be back here from (second town) in (second time limit) days after that, understand? Not a lot of time. I'm counting on you, (player's first name). Good luck and farewell."

"(Oath), I was afraid you were going to say that. Ah well, I suppose that is better than saying yes and failing."

The object of this quest is simply to take the item and get it to its original destination. Head to the town where the temple is located and enter it. Search around the floors until you find the religious item, and pick it up. Once the item is in your possession make haste with your escape, because some monks may show up to stop you, shouting:

Take care of any resistance. Travel to the noble's contact and give them the item. The contact will say:

"Thank (god's name) you arrived, (player's first name). Listen, hurry back to (noble's name) -- (he/she) will pretend to forget you ever existed and you won't get a copper if you're not back in (second time limit) days. Believe me, I know (his/her) ways."

Head back to the noble who gave you the quest to collect your reward. Take heed because the second time limit is usually very tight.

Upon your return after the item was delivered, the noble will say:

"(Oath), welcome back, (player's first name). I don't know why I hired that mental deficient in the first place. Well, here's your (random gold) gold pieces. You certainly deserve it."

If you don't deliver the religious item to the noble's contact in time you will lose reputation according to the table below.

If you ask an NPC about the noble's contact in the contact's town:

After you have accepted this quest, NPCs may say when asked for any news: (Temple) is tightening up their security for some reason."