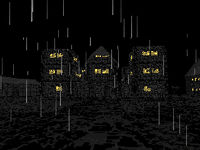 The lights are on... 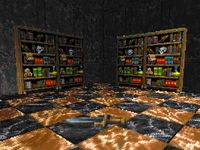 ...but nobody's home to stop you from grabbing the vampire relic... 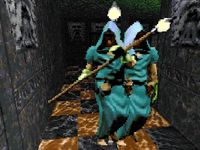 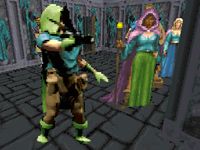 You will be dogged by spellcasters until the quest ends 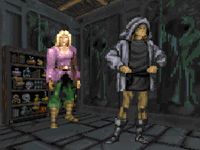 A dashing young vampire and his lovely potion-maker friend

When your bloodline requires your assistance, they contact you (in a rather unconventional fashion):

A rolled parchment on the ground catches your eye. As you take a closer look, you are astonished to see that it is addressed to you.

Open up the note and read it:

My dear (player's first name),
We have a small task for you to perform to
prove your resolution to be one of us. There is
a (vampire relic) of ours sequestered like a
bit of trite incunabula in the Mages Guild of
(first town). Liberate it from its prison
within (time limit) days when they plan to move it
to a more secure location.
Once you have the (vampire relic), come to me.
I will wait for you for (time limit) days at
(building) in (second town). I am
easy to recognize. Look for a (vampire's description).
I am looking forward to making your acquaintance
less formally, (player's first name). Do not fail to come.

After reading the parchment, travel to the town named within. Once you are there, enter the local Mages Guild. If you arrive during its normal business hours, the doors will be open. Otherwise, you will need to pick the lock or cast an Open spell to get inside.

Find the vampire relic within the Guildhall and take it. Beware, as taking the item alerts the guards; you may be set upon by a posse of mages and battlemages. Either make your escape or fight through the opposition, then travel to the town where your vampire contact is waiting.

Once in the second town, ask around to learn where your contact is staying. Head to this building and hand over the vampire relic to complete the quest.

If you deliver the vampire relic in time, your vampire contact will take it from you and say:

"Pleased to meet you at last, (player's first name). I, of course, am (vampire's name). (Bloodline) tribe will take proper possession of the (vampire relic). Don't get any silly ideas about getting paid for this. It is an honor just to serve (bloodline)."

If you ask an NPC about your vampire contact, they may say:

If you ask an NPC about the vampire relic, you may be told: