Speak to a noble, who says:

"I am desperately trying to solidify my unsteady relations with (ally's name), but I find that my position as a strong and capable ruler is being questioned because of my inability to rein in a madman. My people call this maniac the Butcher of (region). Try as they may, my guards and constabulary are helpless against him. They have no clues to his identity whatsoever. I know you have some resources and rather untraditional [sic] contacts. Will you try and help me in this matter, for the good of all (region) -- and a substantial sum of gold?"

The noble goes on:

"Thank (random god) for that anyway. I am planning on meeting with (ally's name) in (time limit) days, and if this situation is not resolved by then, my position will be compromised. Not to mention the potential riot situation developing here in (town) as the murders continue. The only other person I've unofficially hired on this is (scholar's name), a scholar in (alchemist store) who has been analyzing some of the letters I've been sent. Talk to (him/her) first, and check with his [sic] progress. And not a word of this to (ally's name), if you happen to come across (him/her) in (ally's town). I need (him/her) to believe that the situation is not out of control."

"Not an uncommon response. Then I have little choice, but to call on some of my less savoury contacts for help -- an option I was hoping to avoid." 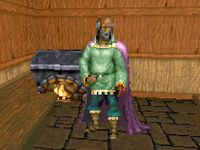 The scholar is hard at work

Your first objective is to meet with the scholar. He or she will be busy investigating the noble's mysterious letters in an alchemist's shop in town. When you arrive, two scenarios are possible depending on how long it took you to enter the shop, as the Butcher is also after the scholar.

If you arrive before the Butcher, find and speak to the scholar, who greets you with:

"(Player's name)? I'm (scholar's name). I was just on my way to (cousin's house) to meet someone who might be able to shed some light on this situation. A distant cousin of (noble's name), a (cousin's description) named (cousin's name), has been receiving letters that (he/she) says I ought to see and compare to the ones (noble's name) received. That is all I know. Since I'm so busy here, why don't you run over to (cousin's house) and see if (cousin's name) will stop being so mysterious."

The scholar gives you a letter and sends you on your way. Your next step is to find the noble's cousin. Ask around to find the location of this residence and head inside.

If enough time has passed before you enter the building, the Butcher reach the scholar before you; this happens 30 minutes to 15 hours from the moment the quest begins. In this case, you will find the scholar's battered corpse. Search around the body for clues, and you will find two letters the Butcher sent to the noble. These read:

(Noble's name), the last
one was So Tasty, I eveN toke a bite. Yor
WHole family looks juicy too -- may be the
Butcher will visit
you nexxt. Butcher to make the meat tHen a
litle Moor to setle the scoor.

(Noble's name), catsh me if you CAN
Cant you find me may be Im DEAD
What do you no abut deth any how

Also on the corpse (or given to you by a still-living scholar) is the letter from the noble's cousin, which provides your only hint as to where to go next. It reads:

I received a letter recently which I at first
considered to be merely a sick joke and very
nearly threw out. When the Butcher killings
began, I reconsidered. With your expertise,
could you possibly look at this letter and see
if the handwriting is the same as in the letters
my cousin (noble's name) has been
receiving?

(Child's name) and I will be here,
waiting for you. I would prefer not to go into
more detail in written form, as the subject is
rather embarrassing and not for discussion with
any but close friends.

There is no more to be learned here. The next step is to meet with the cousin, so ask around in town to find her residence. 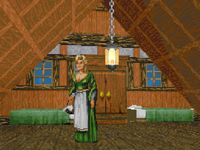 The noble's cousin has received some concerning correspondence... 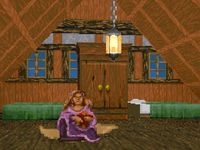 ...and the Butcher will make an orphan of her child if you are not swift

Again, one of two scenarios plays out once you enter the cousin's residence, depending on whether you arrive before the Butcher does.

If you get to the cousin first, you will find her within. Speak to her and she will tell you:

(Player's first name), I trust? (Cousin's name). I believe (scholar's name) wanted you to find me, yes? I'll be honest with you -- I wanted to speak with an old friend of the family about this incident, not, with all due respect, a mercenary. In all probability, the name of the Butcher of (region) is (Butcher's name), a poor sick cousin of the (ruler's title)'s and mine who was sent to an asylum years ago. For the sake of the family, it is essential that this be kept as quiet as possible, and that allies like (ally's name) be steered away from learning the truth. (Butcher's name) needs to be silenced before (he/she) decides to write to someone other than my cousin and me. I've already found and bribed the courier who brought me the letter, and I think I know where (Butcher's name) is living. If you're really serious about catching that maniac, (Butcher's house) is where you ought to go next."

Ask around to learn the location of this house, then head there to confront this relative who may be the Butcher.

If you arrive too late, the cousin will be gone. The time frame in this case is about 15 hours to 1½ days after the quest begins. In her place, you will find her child. Speak to the child and hear:

"My big cousin (Butcher's name) came by, and (he/she) said (he/she) wanted to see my mother. I don't think she liked that, because she screamed a lot. (Butcher's name) took her away, and told me to come to (his/her) house in a little bit after he was finished visiting with my mother, but I don't want to go 'cause everyone knows (Butcher's house) is haunted."

Along with the child, you will find a note. Pick it up and read it:

(Cousin's name),
Thot you'd never be geting leters from
the DEAD dind you? The (ruler's title) iz
gogning to lern all I lernd abut deth from
the PIT. Hope yor readi too start lookin
ovr yor sholder, cuz Imm BACKAND I GOT A
kniF!

Ask around to find the residence the child named, then head there in search of the Butcher and the cousin. 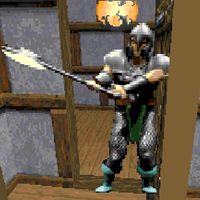 The Butcher is not afraid to leave one last victim

The Butcher's house may be locked, so be prepared with some means of gaining entry. There is the possibility that the Butcher is no longer at this house, this happens about 10 minutes to one day after kidnapping the noble's cousin. If this is the case, you will find the corpse of the noble's cousin at the house and yet another letter, which reads:

(Noble's name),
Em turning in m kniF, for I no you
wont never ketsh me. But I will tel you
and you alon that the MAD slasher of (current locale)
the (region) Butchr is (Butcher's name)

Culdnt you guess, cusin? YOU PUT ME IN A
HOL TO ROT! A STEAMING PIT FILLD WITH
THE BLACK BODYS OV YOUR OWN KIN!!
How kn you lif with yorself knowin what you
did too yor cusins to be (ruler's title) ...
(Butcher's name) hopes too see you in
OBLIVION, (noble's name) wher I will
put you in a dark hol n you can eat yor
chilren too surviv. Sumday yor freinds
will know, yes, I hop they will. And then
they will rip you n thro you down to me,
and you will screm and screm, but not lik
me, you will be DED!

Unfortunately, the Butcher has escaped. It is no longer possible to successfully complete the quest, which will end in failure once the time limit expires, though you can still get a reward (see below).

If you arrive in time, however, the Butcher will be home. If the noble's cousin has been kidnapped, you will find her corpse nearby as well. The Butcher is a barbarian class enemy, and when hit for the first time shouts:

Kill the Butcher. If you loot the corpse, you will find the letter that would have been left with the cousin's body. Once you are done here, return to the noble for your promised reward. 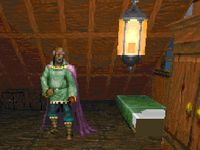 Alerting the noble's ally to these events will cause a scandal

If you kill the Butcher, the noble will thank you:

"(Region) is at peace again, (player's first name), thanks to you. Here is the (random gold) gold I promised -- gladly will I give it for the end of that maniac. (random god) truly blessed us when you came to (region)."

Alternatively, you can seek out the noble's ally for a reward (if the Butcher escaped capture, this is your only option). Ask around to find the building where the ally is staying. Enter the building and deliver the Butcher's letter to hear:

"(Oath)! The Butcher of (region) is (noble's name)'s cousin? I heard that there were suspicious circumstances behind the (ruler's title)'s ascendancy. This will be investigated fully, mark my words. You are a true patriot to bring this to my attention, (player's first name). Here, please accept this (gem) as a gift for your service."

If you successfully deliver the letter to the noble's ally, you will gain reputation with the Merchants. The quest, however, will end in failure once the time limit expires.

If you don't give the butcher's letter to the noble in time, you will lose reputation as shown in the table below.

If you give the butcher's letter to the noble's ally you will get reputation as seen in the table below.

If you ask an NPC about the scholar, you may be told: