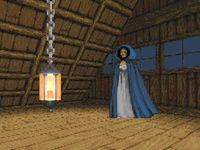 Your contact, bathed in the soft glow of a lantern 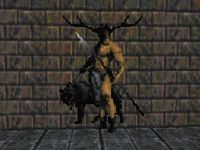 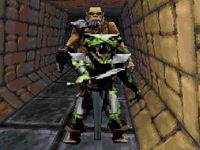 Prove your worth against whatever foes the Daedra throw at you

When your bloodline requires your assistance, they contact you:

A terribly pale, wild-eyed boy hands you a letter and disappears into the darkness.

Check your inventory for the letter, which reads:

Dear (player's name),
(Bloodline) have need
of you. Come immediately.

Yours in Death,
(Vampire's name)

Head to the town named in the letter, locate and enter your contact's building. The door may be locked, so be prepared to pick or otherwise bypass the obstacle. Find and speak to your vampire contact within, and hear:

"Ah, (player's first name), you received my letter. The ancient of our tribe, your bloodfather, has asked that you investigate a matter that disturbs him greatly. Here is a copy of a letter he found wrapped around a knife in his sanctuary. Obviously whoever sent it is of no mean power and wants to test the strength of (bloodline). Go to the dungeon mentioned in the letter, this (dungeon), find this (daedra disciple's name) who wrote the letter and show (him/her) that (bloodline) are no cluster of mollycoddles to be idly threatened or ridiculed. The pride of (bloodline) goes with you, (player's first name). I will expect you back in (time limit) days with this matter settled. Do not fail us, (player's first name)."

The letter your bloodfather received will yield some clues. Check for it in your inventory, it reads:

Blood Sponge,
My coven tells me that your monsters,
your weird little pack of blood snorting
bugaboos, have a monopoly on the terror
business in (region), and that my
own children are afraid to expand their
dominion because of the raw power of (bloodline).
The cowards have been appropriately punished
and now my coven moves forward.
If the complacent vultures who call
themselves (bloodline) truly have an ounce
of the potency my coven once believed, answer
my challenge. Otherwise, be prepared for there
to be a little less room in (region) for (bloodline)
and your petty criminalities.
I am (daedra disciple's name) of The Coven of
(Daedra Prince). Consider the gauntlet dropped.
I await your response in (dungeon).

Travel to the dungeon named in the letter and find the daedra disciple within. The disciple will appear in the form of whichever Daedra Prince he or she reveres, When spoken to, the disciple reiterates the challenge:

"Welcome to (dungeon), (player's name). I take it you are here on behalf of (bloodline) to acknowledge that the Coven of (Daedra Prince), Prince of Oblivion is henceforth supreme in (region)?"

To answer the challenge and defend your bloodline's honor, choose "no". The disciple responds with:

"You dare to challenge the supremacy of (Daedra Prince), to my very face, undead worm? (Daedroth's name) will enjoy crushing your impudent bones! Show me a member of (bloodline) who can fight as well as brag!"

The disciple leaves, and a Daedroth appears. You must defeat this creature in combat to prove your bloodline's might over the Coven's minions. When the Daedroth is dead, the Daedra Prince contacts you directly:

You hear (Daedra Prince) speaking to you in your head: "You have proven to me that (bloodline) are worthy of respect. You may tell (vampire's name) that (region) is yours. You are an interesting specimen, (player's name). I am certain we will meet again."

Your work here is done; return to your contact and be rewarded for your actions.

If you instead reply with "yes", you acknowledge the Coven's superiority over your bloodline and its dominance in the region. The disciple then allows you to leave without a fight, but is disappointed:

"Cowardly bloodsucker. I expected no more, yet I had hoped. Go back to (vampire's name), child."

This choice means you fail the quest. Head back to your vampire contact to be chastised for your cowardice.

When you speak to the vampire after you have defeated the Daedroth, you are told:

"You have honored (bloodline) this night, (player's first name). (Daedra Prince) has respect for us and for you that no other vampire tribe has ever earned. Your bloodfather told me to give you this (gem) as a symbol of the permanence of your place in (bloodline).

When you return after bowing to the Daedra, the vampire will say:

"You have failed (bloodline), (player's first name). The Coven of (Daedra Prince) challenged us, and you were an embarassment [sic]. It is a night of shame."

If you bend to the Daedra, you will lose reputation as follows.