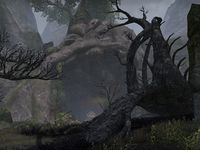 The City of Ash I is a group dungeon found in Greenshade. 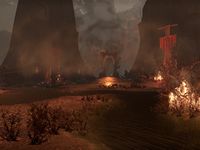 City of Ash I

Formerly known as the graht-oak city Whisper Grove, a recently opened Oblivion Gate and hordes of Daedra have turned the Bosmeri city into a dangerous burning ruin. The city's desperate inhabitants have even resorted to breaking the Green Pact, constructing barriers of fallen wood to stem the flow of invading Daedra.