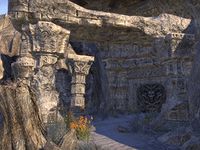 Bloodroot Forge is a group dungeon in Craglorn.

It's part of the Horns of the Reach dungeon pack DLC, along with Falkreath Hold. The entrance is located west of Elinhir. The dungeon itself takes place at an ancient Nedic site that is associated with Hircine, and is located high in the Jerall Mountains.

Horns of the Reach and Update 15 Preview

The first of these new activities is Bloodroot Forge, an ancient, long-forgotten forge that was recently rediscovered by the Reachmen and their minotaur allies. This forge, rumored to have been created by the Daedric prince Hircine, can create weapons of unbelievable power. When exploring this new dungeon, you will navigate through heavy vegetation and deep, lava-filled corridors to reach the heart of the forge and put a stop to Gherig Bullblood's plans.

The Bloodroot Forge had been buried and hidden away for longer than any could remember, until the unification of Reachmen and Minotaur facilitated its rediscovery. Now, the fires of the ancient forge burn anew and the power emanating from it is palpable. Only blood and sacrifice to untamed nature can unlock its true potential and the Reachmen are generous in their offerings.

Horns of the Reach – Bloodroot Forge

The Dreadhorn Clan, an unusual alliance between Reachmen and Minotaurs, has been terrorizing the people of the Jerall Mountains for months, and now you and your comrades must travel to a long-forgotten site to investigate the fate of those taken and discover the truth of Bloodroot Forge …
When traversing the winding paths towards the Forge, you'll notice the twisting growth of pulsing vines and rich Nirncrux veins. These strange plants seem to draw Nirncrux, a rare material reportedly found exclusively in Craglorn, up from the ground in huge quantities, bathing the area in a red glow. As you work to free the captives and investigate the Forge, you will quickly find that the environment is not the only thing that has changed in unusual ways. The savage Reachmen have been twisted by their Nirncrux Heartstones, and they stand with their fierce Minotaur allies guarding the Forge. Even worse, Nirnblooded beasts, magical creatures imbued with Nirncrux, have been summoned by a powerful Hagraven to assist them.
The deeper you go into the mountains, the more dangerous the environment will get. As you work to uncover the fate of the poor souls captured by the Deadhorn Clan and shut down the Forge, you must navigate the site's crumbling caverns and red-hot molten Nirncrux lakes.
Finally, as you enter the Bloodroot Forge itself, you will discover first-hand the cost of the Reachmen's terrible blood rituals and the power they bring to life.

Horns of the Reach Details

Venture into the depths of Bloodroot Forge to stop the Dreadhorn clan of Reachmen from gaining a terrible ancient power.

There are 20 Achievements associated with this dungeon:

This Elder Scrolls Online-related article is a stub. You can help by expanding it.
Retrieved from "https://en.uesp.net/w/index.php?title=Online:Bloodroot_Forge&oldid=2686234"
Categories:
Hidden categories: