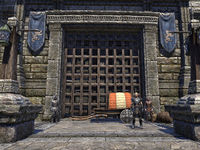 Falkreath Hold is a group dungeon in Craglorn.

It's part of the Horns of the Reach dungeon pack DLC, along with Bloodroot Forge. It can be entered by cart from the Cyrodiil Gate Garrison, just east of Elinhir.

Horns of the Reach and Update 15 Preview

The second dungeon is Falkreath Hold, a township under siege that will soon fall to the marauding hordes of Domihaus the Bloody-Horned. You and your companions must break the siege, move into the town and Jarl's Hall, and defeat the monstrous warlord himself.

Falkreath is under attack by the combined forces of the fearsome Minotaur Domihaus the Bloody Horned and his Reachman marauder allies. This army of "beastmen" have adopted his visage when launching their attacks to inspire fear and terror, with much success. You must enter Falkreath and defend the hold as enemies pour through its broken walls set on its destruction.

Horns of the Reach – Falkreath Hold

The mysterious forces that have been raiding the Jerall Mountains for months have finally attacked a major city. Falkreath's defenses are under assault by the Dreadhorn Clan, an unusual alliance between men and beasts, and without your assistance, the invaders threaten to burn the city to the ground … When you arrive, you'll witness a city under siege. Of course, Falkreath is not without its protectors, as Jarl Skjoralmor's daughter, Eerika, has mounted a spirited defense, but the city's tall walls cannot hold back the invaders forever, and without help, it'll soon fall.

Horns of the Reach Details

Defend the Nords of Falkreath Hold by defeating the Dreadhorn clan of Reachmen and their savage Minotaur allies. 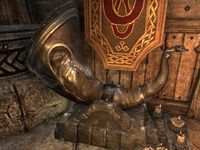 Hard Mode is only available in the Veteran version of Falkreath Hold. When you get to the final boss fight against Domihaus, you have the option to activate a Warhorn to the right of the door after you enter the Jarl's Hall. Activating the Warhorn will destroy two of the wooden pillars prior to the fight beginning and will make the boss fight more difficult. If your group dies, the horn will need to be sounded again to reenable Hard Mode.

There are 19 Achievements associated with this dungeon: