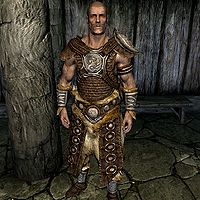 Valdimar is a Nord sorcerer found in Highmoon Hall in Morthal. He becomes your personal housecarl when you have earned the title of Thane in Hjaalmarch.

Valdimar wears scaled armor with matching boots and bracers, and he wields a steel mace. He knows the Alteration spells Oakflesh and Stoneflesh, the Destruction spell Ice Spike, and the Restoration spells Close Wounds, Healing, Lesser Ward, and Turn Undead.

This Skyrim-related article is a stub. You can help by expanding it.
Retrieved from "https://en.uesp.net/w/index.php?title=Skyrim:Valdimar&oldid=1944021"
Categories:
Hidden categories: