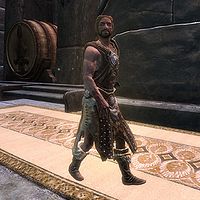 Ulfgar the Unending was a Nord warrior from the Second Era who can be found in the Hall of Valor. He and four companions embarked on a quest to find Sovngarde. However, his companions Nikulas, Erlendr, and Hunroor were betrayed by the wizard Grimkell, who turned them into stone pillars at Brodir Grove on Solstheim. They were avenged by Ulfgar, who killed the wizard. Five hundred years later, Ulfgar was somehow still alive, and still searching for Sovngarde. In 3E 427, he met the Nerevarine, who agreed to help him find the Nordic paradise. Upon investigating, the Nerevarine informed the ancient Nord that the only way to reach Sovngarde is to die an honorable death in combat. Ulfgar challenged the Nerevarine, hoping to meet such a fate. The Nerevarine accepted his challenge, and the two engaged in mortal combat. In the end, a fourth pillar appeared at Brodir Grove, and Ulfgar met his old friends in Sovngarde. For more information, see the lore article.

In his afterlife, he wears a set of studded armor and a pair of hide boots. He is armed with a one-handed weapon and a two-handed weapon, both leveled and ancient Nord in quality, in addition to an iron shield.

This Skyrim-related article is a stub. You can help by expanding it.
Retrieved from "https://en.uesp.net/w/index.php?title=Skyrim:Ulfgar_the_Unending&oldid=2033877"
Categories:
Hidden categories: