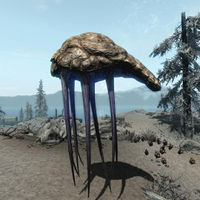 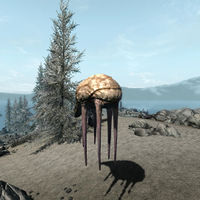 Netch are a species of large, tentacled creatures that float several feet above the ground. Netch were often domesticated on the Morrowind mainland, while wild netch were first sighted on Solstheim several decades ago. Variants of netch include the betty netch, bull netch, and netch calf. They are often found in groups of three to six: one bull, one to two betties, and one to three calves. They are docile animals and can be approached without incident, but will defend themselves with powerful strikes of their tentacles if attacked.

You may randomly find a group of four hunters preparing to hunt netch in the wilderness of Solstheim. You can choose to assist them, or wish them luck and be on your way.

Statistics and information for each variant of netch are found in the table below:

This Skyrim-related article is a stub. You can help by expanding it.
Retrieved from "https://en.uesp.net/w/index.php?title=Skyrim:Netch&oldid=2237817"
Categories:
Hidden categories: