Nchardak is a largely sunken Dwarven ruin located north-northeast of Tel Mithryn. The inside of the ruin cannot be entered until after starting the quest The Path of Knowledge. 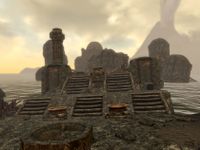 Looking down the stairs toward the Dwemer ruins

Nchardak was known as the "City of a Hundred Towers". It was also the largest, and perhaps the most advanced, of the great Dwemer Archives. Old stories tell of the time when Nords invaded the city and, in response, the Dwemer submerged the entire city beneath the sea until the Nords gave up. At its height, the great workshops of Nchardak were said to be able to produce one complete automaton every day. Much of the army that fought at the Battle of Red Mountain came from Nchardak. Though most of the city is now flooded, the pumps still work when activated with a control cube.

Stone stairs on the shore lead east to a wide walkway. The walkway ends at a wall with a juniper tree. On the north, you can walk off the edge of the walkway into the water; on the south, a curved ramp leads up to an elevated plaza where a fairly large group of reavers are camping. They will attack you when you first visit. There are two tanning racks, a few sacks containing food items, and a table with some loot on it, in this area.

From the north end of the plaza, a walkway leads north to the first of two towers that are quite close to one another; they lean together and touch at the top. There is a locked chest on the sea floor between these two towers on the north side, with a battleaxe laying next to it. The walkway continues east through these two towers to a third tower. This tower contains three pressure plates near the walkway entrances, and a giant fixed-base dwarven bow, so tread carefully. From the north side of this tower, a walkway dips down close to the water's surface, and then rises back up to a broad semi-circular plaza in front of the door to the Reading Room.

When you first arrive, there will be a gate in front of the door, blocking access to it. A pedestal on the north side of the door will accept a control cube to retract the gate and allow the door to be used. Neloth, who joins you during The Path of Knowledge, will unlock the door with a control cube he found the last time he was inside Nchardak, once the entrance is clear. It is not possible to obtain the control cube on your own; you must at least start that quest and let Neloth retract the gate for you.

The entry door opens into a circular room. During the quest The Path of Knowledge, this room will contain the Black Book 'Epistolary Acumen', however it will be in a see-through, circular container in the center of the floor. There are also four lenses set into the floor around the center container. There is a button on a pedestal near one side of the room, but it will initially not do anything. Opposite the entry door, another control pedestal opens a door that leads to a lift down to the Nchardak Great Chamber. Neloth will unlock this door with his cube.

During the quest, Neloth will explain that the only way to free the book is to restore the steam supply to this room. Once that is done, pressing the button causes the book container to rise up from the floor, and make the book available for reading. Beams of light also connect the four lenses in the floor and a point directly above the book. Reading the book starts the quest The Gardener of Men.

As you enter, you will walk straight down a narrow corridor to the north. The corridor turns west, but there is also a small alcove to the east. If you jump off of the walkway into this alcove, you can see an expert-locked chest underneath the walkway. There is a dwarven metal panel forming a ramp in the alcove, so you can climb back up to the walkway.

Heading west you will find yourself in a very large room. There is a raised walkway around the rim but nothing of interest. To the west is a large section of the room submerged underwater.

Walk west down the length of the chamber as Neloth explains a bit of the city's history. At the end of the path, he will activate the pumps with the control cube. With four more cubes, he claims that you can reactivate the steam supply to the room upstairs. Neloth examines a map that shows the cube locations in that section of the city. Take Neloth's cube off of the pedestal (on the west end of the chamber) and use it to activate another control switch off to the southwest, where Neloth leads you. You can now enter the Workshop. See that section before continuing here.

After you return from the Workshop, lower the water levels with two of the control cubes using the same pedestals that Neloth used near the beginning of the quest. There will be more enemies as you continue to follow Neloth towards the next destination below, locked by a control switch.

Before going through the door at the north end of the chamber, head towards the alcove in the southern end of the chamber. A Dwarven automaton will spawn from a port in the alcove. Once it is defeated, you can find a novice-locked chest on a table and a control pedestal in the alcove. Place a cube in this pedestal to lower the water further, leaving only shallow puddles on the floor. Walk out of the alcove and take the curved ramp on the east side of the platform, leading down to the floor of the Chamber. At the bottom of the ramp is a one-story dwarven tower, leaning at an angle. It has a curved gate in front of the door, with a control pedestal on the south side; place a cube to open the gate and allow you to open the door to reveal a unlocked chest with loot.

There are also four malachite ore veins on the floor of the Chamber that can be mined. A Dwarven battleaxe can be found by the northwest malachite vein, near a broken pipe that is spraying a small jet of water into the air. A further chest can be found at the northern end of the bottom level, in the water underneath the curved ramp that leads up to the platform south of the door to the Aqueduct.

After you return from the Aqueduct, you should have four cubes, but you may have three, due to a bug. Use three of the cubes to start three of the boilers, by placing a cube in the control pedestal in front of each boiler. If you have a fourth cube, use it to start the fourth boiler. If not, go up to the platform immediately above the boiler platform, where the two pump control pedestals are. Take only one of the cubes from one of these two pedestals, and use it to start the fourth boiler. The Dwarven Centurion on the west side of the room will activate as soon as the fourth boiler is started. After defeating it, walk through its gantry to a ruined elevator just behind the gantry, with a chest. Head back to the Reading Room.

Talk to Neloth to receive the cube he carries. Without it, you cannot complete the quest.

Entering the workshop, you will see a support pole. On it is a great deal of random Dwemer metal, two potions and a coin purse. The first pedestal with a cube on it is to the northeast.

Take the cube on a pedestal to your left, which stops the flame traps blocking your path. Be careful of Dwarven spiders as you enter the "Great Workshops of Nchardak". Head east.

Place a cube on one of the pedestals at the eastern end of the next chamber to lower the water level. You will encounter a Dwarven centurion as well as Dwarven spiders and spheres as the water levels are altered. Once the water is lowered, you will find more Dwemer metal and a random Dwarven blade (eg Dwarven Battleaxe) in the southeast and southwest corners of the workshop. On the northwest corner is a table with an inert centurion that can be looted.

Head down to the lowest level, which is now available to you, and place the second cube on the center pedestal in order to open up a staircase. You can access these stairs by dropping down onto the lower right level from the upper floor near the first cube you placed. Go through the door in front of you and take a left (the right leads to a small chest) and grab the third cube.

The water level will alter again and more enemies will make an appearance. There is a door on the south wall right across from the third cube - head on in and fight your way through the now-flooded halls. The last cube, which will raise the room's water level once grabbed, is directly in front of a Dwarven centurion you encounter. In the same room, there is a staircase that takes you to another pedestal that allows passage over a gap. You should recognize the next room as the first portion of the Workshop. Head back into the Great Chamber with the collection of four cubes.

The last cube is located in this room, along with the pump activator that can be accessed by lowering the bridges. Just above the entrance are the three control pedestals for the bridges. The control pedestals need to be activated in a specific order: start with the left pedestal, then activate the right pedestal. With all three bridges down, defeat the enemies and cross over. Go up the stairs at the end and activate the pedestal on the left to lower the water level. Walk back to the waterfall; jump or use Whirlwind Sprint to get into the rocky area from which it flows to locate a chest. Drop down and find another chest (Novice lock) at the eastern aqueduct grate, then activate another pedestal directly across, at the western grate (to the left of the room's entrance) to lift it and reveal a door. Inside, evade the spinning blades and activate the control switch to open the door to the last cube. The spinning blades will disappear. A chest is behind the pillar. Then take the last cube and hurry back to the main room before the rising water drowns you. After taking the cube you placed earlier by crossing the three bridges once more, you should end up with a total of three cubes.

Before leaving the Aqueduct, grab the Kagrumez resonance gem located in the northeast chamber of the Aqueduct behind a Dwarven Ballista. The gem is on a table with a weapon, a piece of armor, and some Dwemer scrap. There is also a chest on the table with loot. There is more Dwemer scrap under the table, and on a shelf on the south side of the chamber.

Finally, go back to the three control switches, and walk south, up the ramp behind them. At the top of the ramp, there is a weapon laying on the ground, and a locked chest with loot.

This Skyrim-related article is a stub. You can help by expanding it.
Retrieved from "https://en.uesp.net/w/index.php?title=Skyrim:Nchardak&oldid=2238448"
Categories:
Hidden categories: