The UESPWiki – Your source for The Elder Scrolls since 1995
< Skyrim: Places: Bodies of Water
Jump to: navigation, search 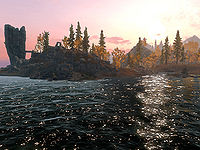 Lake Geir is a lake in the western Rift.

Ivarstead is located on the shores of Lake Geir. In the center of the lake there is an island which is home to Geirmund's Hall.

The lake is fed by an unseen underground spring at the bottom of The Throat of the World (directly behind Vilemyr Inn) and is drained by Darkwater River. The spring and subsequently Lake Geir feed Treva River and Lake Honrich. Lake Geir features three waterfalls.