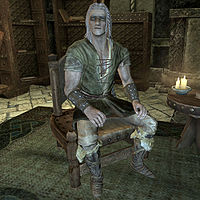 Jorn is a Nord bard who resides at the Bards College in Solitude. He is also the person responsible for preparing the effigy for the suspended festival of The Burning of King Olaf.

Jorn wears a set of farm clothes along with hide bracers and a matching pair of boots. He carries his key to the College, a belted tunic, and a selection of upper-class loot and gold. In combat, he relies on an iron sword.

When spoken to: "I wish only to graduate and enroll with the Legion. My drums will lead our troops to victory."

You seem proud to be a bard.
"And why wouldn't I be? We sing tales of kings, queens and their politics, 'tis true. But do you know who really makes history? The person who writes it."

He can make several remarks towards you:

"It's an honor to have Viarmo for instructions on drum, but he's far too reserved for my tastes."
"Viarmo is too concerned with precision. What of instinct? Hmm? What of passion?"
"Lisette's a fine lass, but when I join the Legion. She's not the type to wait for my return."

Jorn can also be overheard in a few conversations around the college:

Inge: "Your solo performance is about a week away. I expect to hear your early rendition tomorrow, understand?"
Jorn: "I've converted the classic tale of Eyldi the Bear to be performed with drums. I think you'll be impressed!"
Inge: "I'll be the judge of that. Now, back to your practice."

Giraud: "Pardon me, but I trust you've been working on your poem, on the classical heroes of Skyrim, yes?"
Jorn: "Yes sir, Professor Gemane! It's a war epic about Hoag Merkiller's last stand!"
Giraud: "I'm sure it will be fine, just don't be late."

Ataf: "I think Illdi's better than Dean Pantea actually knows. She just gets intimidated when she's in class and can't sing."
Jorn: "I think someone has a crush on Illdi."

Pantea: "You there, have you performed your voice exercises today?"
Jorn: "Yes, Lady Ateia. My voice is strong as a Dragonborn's!"
Pantea: "Yes, well, see that you keep at it. That is all."

The Festival is back on

If spoken to when it's not dusk yet:

"I'll tell everyone we're ready but we'll start the festival at dusk. Come talk to me after dark, we'll get the festival started when you do."

If spoken to when it is dusk:

"Great. Looks like you'll be one of us soon. We'll gather outside the College for the Burning of King Olaf."

When spoken to at the festival:

"There's the man himself!"

This Skyrim-related article is a stub. You can help by expanding it.
Retrieved from "https://en.uesp.net/w/index.php?title=Skyrim:Jorn&oldid=2081824"
Categories:
Hidden categories: