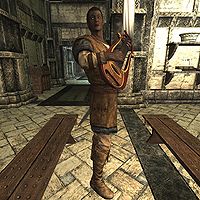 Ataf, a Redguard bard, is a student at the Bards College in Solitude. Being the youngest member of the college, he spends his days in classes to improve his talents at his chosen profession. He is eager to please both his teachers and peers, and will greet new acquaintances rather nicely.

Ataf wears a set of clothes and a pair of boots. He also keeps a belted tunic on his person, but won't equip it. As befitting for a bard, Ataf has a drum, flute, and lute with him. To defend himself he wields an iron sword. He also carries a key to the Bards College and a selection of lower-class items and gold.

Ataf will perform a variety of activities throughout the day at the Bards College. Very few activities in his schedule are set, but he will attend the many classes the college offers. At 4am he will go to the southwestern lecture hall on the top floor to take part in Inge Six Fingers' class. After the class breaks at 8am, he will go to the lecture hall opposite of it for Pantea Ateia's lesson. At 11am he will head out of class an hour early to go outside. Ataf will wait outside of the Bards College for three hours before heading inside again. An hour later, he will head to the library for Giraud Gemane's history class. Once the college ends classes for the day at 6pm, he will spend the remainder of his time doing whatever he pleases. During the festival he can be found playing a flute.

He can potentially say:

"Youngest bard at the Bards College, at your service."
"Anything I can do for you, I will."
"The pleasure's all mine."

He will be less polite during Roggvir's execution; attempts at conversation will have him shoot you down:

"Can we talk later?"

If spoken to after Tending the Flames:

"Always glad to talk to the bard who returned part of the Poetic Edda." 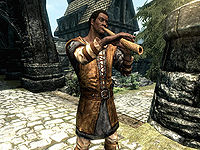 In the Bards College:

Pantea: "All right, let's try something a bit more... fun."
Ataf: "There once was a hero named Ragnar the Red, who came riding to Whiterun from ole Rorikstead!"
Pantea: "That was better Ataf. Add a bit of emphasis on "Ragnar" and "Red.""
Inge: "Remember, it's your job to "deliver" these songs. To excite the crowd. Draw them in and they will love you for it."

Ataf: "I think Illdi's better than Dean Pantea actually knows. She just gets intimidated when she's in class and can't sing."
Jorn: "I think someone has a crush on Illdi."

Ataf may have a few conversations with the local merchants:

Ataf: "Um, excuse me. Could I buy two leeks."
Jala: "Fine, Ataf. You should eat some more tomatoes, though."
Ataf: "My mother always used to say that too."

Ataf: "I went out ice fishing a few days ago."
Jala: "Brave man, with the Blackbloods out there. Did you catch anything?"
Ataf: "Naw, mostly just froze."
Jala: "Well, keep at it. The fish have to get to know you before they're willing to bite."

Ataf: "I'll take a bottle of spiced wine."
Evette: "I haven't known you to drink before, Ataf."
Ataf: "Viarmo is trying to get Elisif to allow the Burning of King Olaf. I don't want to look like I don't know how to drink in front of the other bards."

Evette: "A bottle of spiced wine for ya, Ataf?"
Ataf: "No thank you. I'm still feeling sick from the festival."