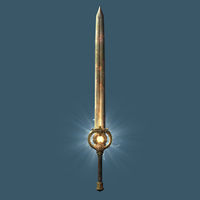 Dawnbreaker is a Daedric artifact given as a reward by Meridia upon the completion of her quest, The Break of Dawn. It can be improved using an ebony ingot. Besides dealing ten points of fire damage on every strike, Dawnbreaker has a chance to create a fiery explosion upon defeating undead. Any undead caught within the blast radius are set on fire and will flee. If you are a vampire, the blast will harm and can potentially kill you. Undead killed by the explosion disintegrate and leave behind an ash pile. Light emanates from Dawnbreaker's cross-guard, an effect that is particularly pronounced in nighttime hours or in dungeons without illumination.