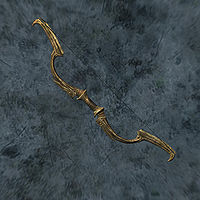 Zephyr is a unique Dwarven bow that belonged to Katria before she fell down a cliff to her death inside of Arkngthamz. The bow itself rests at the top of a ravine, precariously perched on the side of a fallen tree. Zephyr's unique enchantment gives it a much higher draw speed than regular Dwarven bows, making it one of the quickest bows available, alongside Auriel's Bow and the long bow. Zephyr can be further improved with a Dwarven metal ingot if the Arcane Blacksmith perk is unlocked, with the benefits of these alterations being doubled if the Dwarven Smithing perk is also unlocked.