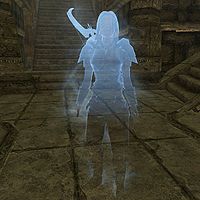 Katria is a Nord spirit who is encountered at the beginning of Arkngthamz. She can initially be heard pleading you to leave the area, and after a while will appear and warn you of the dangers ahead. Katria will explain that she spent her life tracking down the legend of the Aetherium Forge, and that her apprentice stole everything from her and published it all under his own name. Later in the quest you will stumble across her bow, Zephyr. She will ask you to keep the bow and put it to good use. During the quest, you will see her each time you collect one of the Aetherium Shards; once you have found all of them, she meets you at the Aetherium Forge. Once you finish the quest, she will thank you and then disappear from the game.

When first encountered in Arkngthamz:

"(Sigh)... What are you still doing here? Let me guess. You're here for the treasure, aren't you? Just like all the others.

Who are you?
"The name's Katria. I am - was - an adventurer. Raided ruins like this for nigh on twenty years. I was on the trail of something big. It led me here, and... I didn't make it."

What were you looking for?/You mentioned a treasure?/What treasure?
"It's a long story."
"You ever heard of Aetherium? A rare mineral used by the dwarves. Supposedly, they had to build a special forge, the Aetherium Forge, to even work with it. The items it made were so powerful they went to war over it, and the Forge was lost. Or so the story goes."
And that story led you here?
"I spent my life tracking down that legend... until my damn apprentice stole everything from me, and published it all under his own name. And now... now I can't rest. Not until I have proof. Something to show the world what I discovered, what I did. That my life... mattered. But... it's hopeless. I died here, just like all the others. Turn back. Turn back before you become the next victim."

I can handle myself. (Persuade)

I won't give up that easily.

Get out of my way.

The first two options will lead to:

If spoken to after this:

What happened to this place?
"It wasn't always like this. Best-preserved dwarven city I'd ever laid eyes on. And then... the earthquake hit. Now... you'd be lucky to find a single room intact."

Any dangers I should be aware of?
"Well, there's the Falmer, to start with. Deadly rapids. Major earthquakes. Massive chasms. Unstable ground. Lethal falls. And then you get to the real danger. We can discuss that when the time comes. If it comes."

How did you die?
"I... fell. When the earthquake hit> The ground just... opened up. Even so, I almost made it... another foot or two to the side, and the water would have broken my fall. But... nothing I could do."

When you approach her dead body:

If you walk past her body and don't pick up the journal she will say:

If you take the armor from her body, she will say:

"Really? You had to take the armor? Come on, leave me with a little dignity."

Once you enter the room with the kinetic resonator:

"See that thing? Dwarves call them 'Kinetic Resonators'. Don't see them very often, least not among the clans in Skyrim. Just hit them, and they'll do... whatever it is they're supposed to do."

After exiting this room:

"Falmer up ahead. Damn things are like flies. No matter how many you kill..."

After killing the Falmer:

"Quite a place, huh? Was even more impressive before it all fell to pieces"

When you pass by the locked door near the waterfall:

"Look, there's a chest in there. Door's sealed up tight though..."

"Here's where I fell. Feels like ages ago. Hey there's my bow! There, out on the log. Wondered what happened to it."

If you pick up the bow:

"Take good care of it for me."

She will approach you:

"Hold up... we need to talk. I mentioned that there was one more danger. Here it is. You know what this is? It's a lock. A 'Tonal Lock'. Simple, and very, very deadly. See the Resonators up there? Strike them in the right order, and the doors should open. Get it wrong, and... well. You've seen what happened when I tried it."

You mean... the earthquake?
"...Yeah. I thought I was prepared for anything. How can you prepare for a damned earthquake? And that was just one trap! Look around! Who knows what else this thing is capable of?"

When you approach the tonal lock:

"See if you can find a pattern in the sequence. Most of these locks have a pattern of some kind."

If you hit the wrong resonator:

After hitting three of the correct resonators:

After hitting the final correct one:

Entering the room with the aetherium shard:

If spoken to before picking it up:

Once you pick it up:

"So, it is real..."
What? What is this?
"Let me see it. ...Huh... Look on the edge here. This has been cut, precisely cut. If you had another piece, about the same size, it would... it would snap right in. I saw a drawing of this once. This shard... it's... it's part of a key. A key made of pure aetherium! The key to the forge!"
So... what now?
"We have to find the other pieces, of course. There should be, hmm... three more. One for each of the cities that worked on the Forge. I had a map in my journal. That's where we should start."\

If you have already found an aetherium shard, you have an option to reply:

I already have another shard.
"Really? Well, now, that makes things easier."

Upon adding this, or if you haven't found any other shards, you will simply respond:

Then what?
"We still have to find the Forge itself. I had a lead on that, too. There's so much to do. I'm going to head out and start tracking things down. We'll meet again, I'm sure of it. For the first time in a long while, I think I - we - may actually be able to do this. And... and I owe it all to you. Thank you."

This Skyrim-related article is a stub. You can help by expanding it.
Retrieved from "https://en.uesp.net/w/index.php?title=Skyrim:Katria&oldid=2654558"
Categories:
Hidden categories: