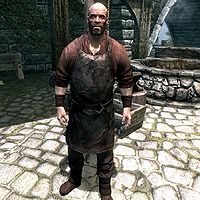 Beirand is a Nord blacksmith who runs the smithy in Solitude with the help of his assistant, Heimvar. He will give you Imperial armor after joining the legion. He is married to Sayma and has one son, Kayd.

After the execution, he will resume his schedule: between 8am and 10pm, he can be found working at the smithy. He then spends two hours at home with his family, chatting, relaxing, taking a nap, or having a bite. He goes to bed at midnight.

Beirand wears a blacksmith's apron along with a pair of shoes. He carries his key to the Solitude Blacksmith, a key to his wife's store, Bits and Pieces, a belted tunic, and a selection of common loot and gold. In combat, he relies on a steel mace.

If you have just joined the Imperial Legion, you will be sent to Beirand to get outfitted:

General Tullius said you'd get me outfitted.
"Yep. I have just one question for you. Light, medium, or heavy?"
What?
"Light armor for scouting detail, heavy armor for full on combat, or something in between?"

"Alright... here you go. Should keep you light on your feet, and hold up decent enough if you wind up trading blows with the enemy."

"Alright. This here's enough to keep your insides from spilling out, except from the fiercest of blows, and shouldn't weigh you down too much."

"They don't make finer steel anywhere else. If this doesn't keep you from dying, nothing will."

Whichever set of armor you chose, he will end with:

"Now, that's it. One free outfit per soldier. You lose that, or get it banged up, you'll need to pay like everyone else."

While he is working at the forge, he will advertise his goods to potential customers, shouting:

Should you approach him for conversation, he will comment:

"Wanderer like you must have plenty of tales to tell. But I'm afraid I'm too busy to hear 'em."

Depending on who controls Solitude, he will also remark on his seemingly endless job:

"Seems there's no end to the needs of the Imperials. But what can I help you with?"
"When the Stormcloaks took Solitude, I thought for sure things would slow down. But they keep me just as busy as the Imperials."

When you bid him farewell, he will tell you:

If you offer to invest in his business:

I'd like to make an investment in your business.
"Such an investment will mean that I can take better care of my family, as well as my customers."
Let's see what you can do with this.
"You'll look back on this as one of your best decisions, I swear it."

When spoken to directly he can be asked questions about himself and his work:

Have you considered getting out there and fighting?
"I think I would, if it weren't for my son. And my wife.
Oh, Sayma would have my hide if I even suggested I might step foot on a battlefield. You think Stormcloaks and Legionnaires are dangerous? Ha!"

You can also ask him about his job as an armorer. If the Imperial Legion controls Solitude:

You make armor for the Imperials?
"It's almost all I have time for these days. The men training here in Solitude and the troops out in the field, they all need weapons and armor."

If you have not joined the Imperials, he will end by suggesting:

"You should look into joining. They could use every hand they can get."

If you have already, he will instead say:

"But I'm not telling you anything you don't already know."

Either way, you can ask him if he is dedicated to the Empire:

You're pretty dedicated to the Empire, then?
"Ah... To be honest, no. But High King Torygg supported them, and now her lady Elisif has thrown in with them. You could say I'm a King's man at heart. Hmph. I guess that's 'Jarl's man' now. My loyalty lies with Solitude. So where Jarl Elisif leads, I follow."

If the Stormcloaks have seized the city, he will instead reply:

"These days? Aye. Most of what I make is for folk like you. There's still Imperial camps to be cleaned up, as you know. And that takes arms and armor."

While at work, he will jest with his apprentice Heimvar:

Beirand: "Come on, Heimvar. My son could stoke the forge better than you do!" OR "You're making progress, Heimvar. But my boy could still work the bellows better than you do!"
Heimvar: "Yeah, but can he hammer the anvil for 8 hours straight?" OR "Sure, but I bet he can't hold his mead as well as me!"
Beirand: "Give him time. In a couple years, he'll be the age you were when you started!" OR "Right you are! Guess I'll keep training you... for now."

At Bits and Pieces, Sayma will talk to either Beirand or Kayd:

Sayma: "Sure has been quiet around the shop lately." OR "We hardly ever get new customers anymore."
Sayma: "Not that I mind the break, of course. But, still..." OR "I suppose in wartime, people aren't looking to part with their old junk..."
Beirand: "We'll make it through, dear. We always do." OR "It's okay, dear. More work than ever down at the blacksmith."
OR Kayd: "Who needs customers and their old junk?" OR "Father oughtta punch them in the mouth! That'd get people in here!"