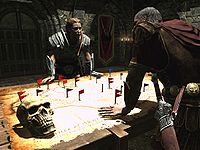 "I'm telling you, Ulfric's planning an attack on Whiterun."

Whenever you meet soldiers of the Imperial Legion, they will encourage you to travel to Solitude and join. In Solitude, the guards will point you towards Legate Rikke at Castle Dour. When you enter, you will witness Rikke trying to convince an ill-informed General Tullius that Nords will follow their traditions, even in a time when loyalty is tested. Apparently, rebel leader Ulfric Stormcloak is preparing to attack Whiterun so the two strategists have their hands full. General Tullius will soon approach you and recall you from Helgen. He will then point you towards Rikke for more information.

Rikke will commend you for surviving the destruction of Helgen and tell you that she's arranged a small test of your skills before you're allowed to join the Legion. When asked which test she will explain: "The kind that evaluates your usefulness during... duress. I'm sending you to clear out Fort Hraagstad. If you survive, you'll pass. If you die, then I'll have no further use for your corpse." She will then explain that the Legion will set up a garrison at Fort Hraggstad but that the place has been overrun with bandits and needs to be cleared. She will not take no for an answer and will just angrily say: "What's the matter, soldier? I gave you an order. I want that fort, and I want it now. Move it!"

The fort is located near the Thalmor Embassy, west of Solitude in the snowy terrain past Wolfskull Cave. Once there, a number of bandits will attack you on sight. The fort has archers, atop towers, so approach with caution. Once the exterior area is clear, locate the entrance to the fort and enter. It consists of two interior zones: the main zone and the prison, both of them accessible from separate entrances in the courtyard. In the prison, two bandits await you in the first room, with another guarding the area downstairs. In the main zone, two bandits and their chief will ambush you upon entering. You can find a copy of the Archery skill book, The Gold Ribbon of Merit upstairs. When all is said and done return to Legate Rikke in Solitude. 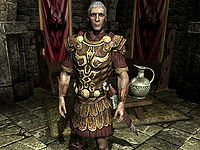 In the castle, Rikke and Tullius will once again be debating, this time about the Jagged Crown. Tullius will once again show a lack of respect for Nordic tradition. Rikke will be pleased to see your success, and she will compliment you on a job well done: "Welcome back, soldier. I'm glad you made it in one piece. I'll send men to garrison the fort right away. You did well. I'm impressed. But before we go any further, it's time for you to officially join the Legion." She will then point you towards General Tullius to take the oath binding you to the service of the emperor and the Legion. Repeat the oath after Tullius:

"Upon my honor I do swear undying loyalty to the Emperor, Titus Mede II..."
"...and unwavering obedience to the officers of his great Empire."
"May those above judge me, and those below take me, if I fail in my duty."
"Long live the Emperor! Long live the Empire!"

One achievement is unlocked at the end of this quest: