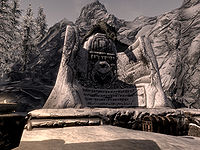 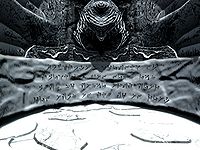 Closeup of the word wall

The route to the word wall is through Bonechill Passage, a short cave. It can also be accessed by using a horse to climb the mountains around the area. There are three snowberry plants to the right of the path after exiting Bonechill Passage. There are a couple wide flights of stairs leading up to a plateau in front of the word wall, with lit braziers at the bottom and top of each flight.

Before the dragons' return, the word wall will be guarded by a few leveled enemies.

After the dragons' return, the word wall will be guarded by a leveled dragon, which will attack as soon as you approach from the cave.

Regardless of whether Dragon Rising has been completed, the boss chest is by the base of the remains of a huge arch found on the approach, between two short flights of stairs leading up to the word wall.