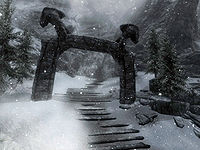 Bonechill Passage is a small cave containing monsters, located east of Falkreath and to the southwest of Helgen.

The cave itself is a short iced over passageway leading to Ancient's Ascent. 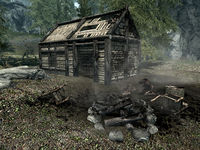 Following the path from the road leading to Helgen will take you past a small house that was attacked by the dragon that lives at the Ascent. A note to the authorities reveals that the owner assumed that if the dragon was simply ignored it would leave them alone. Two charred corpses can be found outside, presumably proving him deadly wrong. A copy of the Pickpocket skill book Purloined Shadows is lying underneath his bed. From the house follow the path to the east around an outcrop of rock.

As you approach you will see a huge stone square arch over the steps leading up to the entrance. There is a silver ore vein just west of the base of the steps. 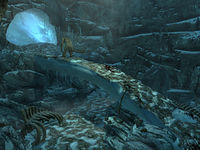 Upon entering you are in an ice tunnel heading south. There is a skeleton on your left with a medium coin purse beside it, opposite are a pair of random boots. A leveled creature is guarding the path ahead. Once dealt with, moving forward, on your right you pass a mammoth skull with a dead bandit and a leveled potion of healing lying beside it. Further along also on your right there is a knapsack next to another skeleton and a copy of the Heavy Armor skill book 2920, MidYear, v6.

The tunnel narrows and bends to the east, then opens out into an unroofed section with a bridge across a chasm with a leveled creature stood on the far side. On your left at the start of the bridge is a dead goat. Under the bridge are two skeletons that can be looted, with one of them having a random potion of stamina beside it. Once across the bridge the tunnel rises quite sharply and after a couple of turns leads to the exit.