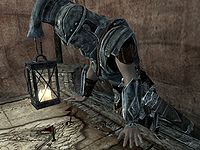 "One way or another, get me those documents."

After successfully defending Whiterun on behalf of the Imperial Legion, the umbrella quest Reunification of Skyrim will start, as it is high time to conquer all remaining holds currently controlled by the Stormcloaks and once and for all rid Skyrim of Ulfric Stormcloak. Unless you used it for negotiations during Season Unending, your very first target will be to claim the Pale to the north. As General Tullius puts it: "You'd be wasted as a regular soldier. I have special plans for you. You'll be of greater use to me with greater flexibility. Make your way to our hidden military camp in the Pale. Rikke will have important tasks for you, and will need you when we reclaim the capital."

When Tullius asks you to regain the Pale, your commander-in-chief Legate Rikke will relocate to the snowy Pale Imperial Camp east of hold capital Dawnstar. Rikke will be located in the easternmost tent, busy studying a huge regional map of Skyrim. When you report for duty she will let you in on her plan to conquer the Pale: "I need you to deliver some false orders to the Stormcloak commander in Dawnstar. But first we need to get our hands on some rebel orders to make the forgeries." She will then explain that a Stormcloak courier will travel back and forth between Candlehearth Hall in Ulfric's home city Windhelm, and Nightgate Inn, a remote inn between Dawnstar and Windhelm. She will then task you: "See if you can't 'convince' one of those innkeepers to help you. One way or another, get me those documents. But don't do anything rash if you go to Windhelm." Obviously, Rikke recommends the Nightgate Inn due to its remote location, but leaves the decision and strategy to you.

Your first objective is to find the busy courier. He is quite hard to corner in the wilderness, as he will run back and forth between Candlehearth and Nightgate, and your map markers will only point to the taverns, making it hard to know where the courier is. You will have to either meet him by accident, or ask the innkeepers for his whereabouts. Some useful knowledge is displayed below:

As an alternative to meeting the courier and getting the map marker by chance, you can follow Rikke's advice and ask the innkeepers. Both the innkeeper of Candlehearth Hall, Elda Early-Dawn, and Nightgate's Hadring have the same dialogue and they will have to be persuaded, bribed, or intimidated as they will both say: "I tend to keep my patrons' privacy." Note that you will need a Speech skill level of 50 or above to successfully persuade the innkeepers, and that you will always get your answer when intimidating, as it is not possible to fail:

When you have successfully finished the persuasion, both innkeepers will now say: "He's in the inn. Look around. I'm sure you'll find him.", if the courier is present, or "He was here, but he left. If you leave now, you can probably catch him. Or, you can just wait here. He'll be back soon enough." 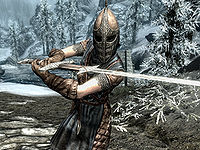 Regardless of your method of locating the courier, the map marker will now point directly to him. Regardless of what you say, or what uniform you are wearing, the Stormcloak courier will not give up the documents without a fight, with the inevitable result. When you approach the courier, you will have no options but to say: "I'm not here to talk. I'm here for those documents.", and the courier will respond: "Is that so?" or "We'll see about that." The courier will then proceed to attack, leading to his inevitable death. There is only one way to avoid bloodshed:

Killing the courier will always count as murder, even when done with no witnesses around. However, there are a few ways to make the courier die:

Lastly, you can kill him yourself. The goal is to do it when no witnesses are around to avoid a bounty. The two methods above will always lead him into seclusion in the wilderness and work perfectly. Additionally, the courier can be stealthily killed inside his room at Candlehearth, especially if he decided to sleep. It goes without saying that Nightgate is the safest spot to achieve your goal, as Windhelm guards will be all over you if you cause a racket in their city. When the courier is dead, claim the documents from the body and head back to Legate Rikke in the camp. 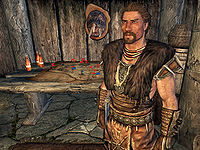 When you return to Legate Rikke and hand her the documents, she will immediately start forging the documents, saying: "Very good... Let's see what you have here. Interesting... They know more of our plans than I expected... It would seem Fort Dunstad is in need of reinforcements... We'll make sure they won't be getting those... One moment while I 'correct' some of these documents... That should do it. Make sure those forged documents get to the Stormcloak commander in Dawnstar. It'll throw him off our trail, allowing us to maneuver more freely." When you arrive at Dawnstar, follow the map marker to Frorkmar Banner-Torn, who will most likely stand near the Skyrim map inside The White Hall. When you approach him, his dialogue will differ depending on your choice of armor. If you are wearing anything but Stormcloak armor, he will get suspicious: "Is that so? I don't recognize you. Why aren't you wearing your Stormcloak colors?" You will then have to tell him it is easier to sneak past the enemy without the uniform, and he will admit: "I suppose it would be. Good thinking." He will then continue on, saying the same thing as if you were wearing Stormcloak armor: "All right. Let's take a look... Ah, good. Looks like the reinforcements for the fort are on the way. And we have some information about enemy troop movements as well. Excellent. It's not easy running messages, what with Imperials scouts crawling all over the place. Well done. Why don't you grab yourself a drink at the Windpeak before heading back?" He then hands you 5 gold as a small token of his appreciation, and the quest will end. Back in the Pale Imperial Camp, Rikke will reward you with a leveled amount of gold and will have your next task ready, inspired by the false information you gave to Frorkmar, specifically the quest The Battle for Fort Dunstad.