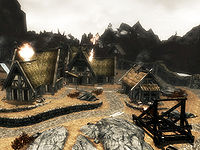 At the end of Message to Whiterun, report to Legate Quentin Cipius and he will tell you the latest news about the Stormcloaks and give you your new orders: "The Stormcloaks are here. In force. Get down to the front line. This is it. We must hold the city. Move it!"

Upon leaving Dragonsreach, you will find Whiterun under siege by Stormcloak catapults. Along the city wall of the Plains District, the Imperial Legion will be returning fire with their own catapults. The streets will be busy with citizens running back to their houses and city guards making ready to fight the enemy. Whiterun will suffer great destruction during the battle. Severio Pelagia will be killed and his home, as well as Heimskr's, will be destroyed.

Just outside the city gates, you will find Legate Rikke on the strategically important main entryway, busy addressing a crowd of fully-armed Imperial Soldiers:

"This is it men! This is an important day for the Empire and for the Legion. And for all of Skyrim. This is the day we send a message to Ulfric Stormcloak and the rebel Jarls who support him. But make no mistake. What we do here today, we do for Skyrim and her people. By cutting out the disease of this rebellion, we will make this country whole again! Ready now! Everyone, with me! For the Empire! For the Legion! Rrrrrraaaaaaaaaaaaahhhhhhh!!!!"

Soon after Rikke finishes her speech, the Stormcloaks will start their attack. Their archers will provide suppression fire from a distance outside the gate, while the main force will move up the main road in groups. First, you need to defend the barricades, then the drawbridge. Finally, you need to kill attacking soldiers until the percentage of attackers remaining drops to zero. Legate Rikke and Hadvar, both of whom are essential and cannot be killed, will give you a hand during the defense, so stay close to one or both of them if you are having difficulty. The united force of Whiterun guards and Imperial soldiers will take advantage of the fortifications and draw the attention of many enemies.

Don't worry if you are unable to defend the barricades or drawbridge. It does not affect the ending of the quest or your reward. 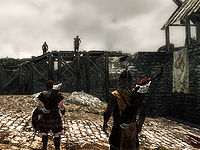 When the percentage of remaining attackers drops to zero, the battle will be over. Any surviving Stormcloaks will lose heart and flee the battlefield.

Irileth will tell everyone to follow her, as Jarl Balgruuf the Greater wishes to speak. You may listen to his speech after the combat:

"Revel in your victory here today, even as the gods revel in your honor! They already sing of your valor and skill! The halls of Sovngarde are no doubt ringing with your praises! In defeating these Stormcloak traitors, you have proven the hollowness of their cause and the fullness of your hearts. The citizens of Whiterun are forever in your debt! But Ulfric will not stop here. No, he will continue to strike out against any true Nord who remains faithful to the Empire. He will continue to sow discord and chaos wherever he can. And so, we must each one of us, continue to fight this insurrection, lest our fallen brothers have died for naught! Lest our honor be lessened should we allow these bloodthirsty beasts to prowl our lands! Carry on men, my gratitude and blessings go with you! For Whiterun! For the Empire!"

At the end of his speech, you may talk to him. The jarl will thank you and grant you the privilege of buying a house in his city, if you haven't already: "Thank you for your role in all of this. It'd be my honor should you decide to make Whiterun your home. Speak with Proventus. He'll make the necessary arrangements." 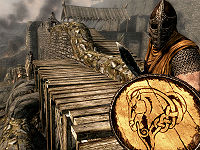 The soldiers muster a defense of the city

Only the quest stages and objectives that are possibly relevant to this radiant version of the quest are shown.