Galmar Stone-Fist will tell you that you need to deliver false orders to an Imperial Legate in Morthal but first you intercept and steal plans from an Imperial courier. He tells you that Dragon Bridge and Rorikstead are frequented often by Imperial couriers, and you should look in the inns of those places.

Head to Rorikstead or Dragon Bridge and speak to the innkeeper in the local inn. To find out the courier's location, you must either persuade, bribe, or intimidate the innkeeper. 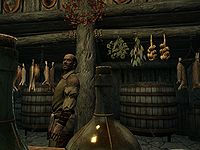 Once you have the documents, head back to the Stormcloak camp and give them to Galmar. He will then forge false information and will then tell you to take them to the Legate in Morthal. Head to Morthal and enter the Highmoon Hall, the Legate is through the doorway, under the stairs, to the left. Talk to him and give him the documents, if you are not wearing a Legion uniform he will ask about it, but upon explaining yourself he will take the documents and give you five gold. Now report back to Galmar to prepare for the Battle for Fort Snowhawk.