The UESPWiki – Your source for The Elder Scrolls since 1995
< Shivering Isles: Items
Jump to: navigation, search

Madness ore is a substance that is only found in the Shivering Isles. As part of The Antipodean Hammer quest, you can take Madness ore to Cutter and she will fashion it into Madness armor and Madness weapons free of charge. Madness Matrices can additionally be used to create enchanted armor and weapons. Madness ore can be found in containers or on creatures.

All standard Grummites may be carrying Madness ore, in most cases there is a 25% chance. There is also a small chance that the Grummite carries a Madness Matrix instead. 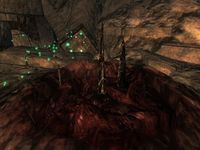 The types of containers that may contain Madness ore are: