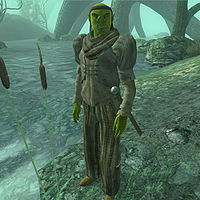 Dulphumph gro-Urgash is an Orc warrior living in the settlement of Deepwallow. He is a Scalon hunter, however if he encounters one, he will likely end up running away from it.

Due to a rather low concentration of Scalons and general wildlife near Deepwallow, the self-proclaimed hunter lives a relaxed life in the swampy settlement. After waking up at 7am, he relaxes inside his house for four hours before he leaves for his daily patrolling duties. From 11pm, Dulphumph can be found on the small promontory a few feet north of Beelei's house, carefully scouting the Enjaen Sea for Scalons. At 2pm he moves further away and will patrol the shallow waters southwest of town. Due to his low confidence and an aggression of zero, should any wildlife arise, the hunter quickly becomes the hunted and he will flee back to safety inside his house. If everything goes peacefully, he returns home at 5pm and wanders around until his late bedtime at 1am.

He wears a patchwork shirt, a pair of huntsman moccasins and a pair of coarse linens. In combat he will use his iron shortsword. He carries his key along with a small amount of gold.

Should you approach him, he will act paranoid and ask: "Were you followed?" When you talk to him for the first time, he will introduce himself: "Dulphumph gro-Urgash, Scalon killer. You'll keep quiet, if you know what's good for you. Never know when one might be sneaking up behind you." And when you talk to him further he will say:"I hope you covered your tracks. Last thing you want is a Scalon picking up on your scent, and catching you when you're not looking." When you exit conversation, he will leave you with an ominous goodbye: "Watch your back." When you become the Madgod, he will have more faith in your capability of dealing with scalons, and will say when approached:: "My Lord comes to rid us of the Scalon menace?" When exiting conversation he'll say: "May the Scalons tremble in your wake, My Lord."

At different stages in the Main Quest, Dulphumph will share different rumors with other NPCs: