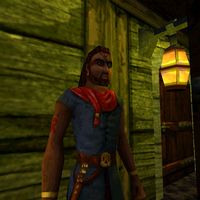 Basil at the League hideout

Basil is the leader of the Restless League, and can be found in their hideout. He is on the side opposite from where Yaeli's boat docks, standing next to Vander, his right-hand man.

Your confrontation with him does not go well initially, although you learn that Iszara is not at the hideout. Vander will attack you at the end of the conversation. Once you defeat him, Basil will give you a bandage to heal your wounds, and the key to Iszara's Lodge. He hopes that Cyrus will be able to open Iszara's journal somehow.

Once you finish reading the journal, a cutscene will play. Basil recounts the Battle of Stros M'Kai in which Prince A'tor died, but further reveals that Archmage Voa managed to put A'tor's soul into a soul gem to preserve his life. Without explaining how, he says the Restless League obtained the soul gem and was working on a plan to bring back the Prince. Then Iszara stole the gem and Basil is clueless as to where she went.

After rescuing Iszara from N'Gasta, she will head back immediately to the League hideout and Cyrus follows her. Basil refuses to send his men to Stros M'Kai until the Prince is restored. He is not confident that Cyrus will manage this task, and believes the League's raids and piracy will eventually force the Empire out of Stros M'Kai.

When you are ready to restore the Prince, Basil will show up at the Temple of Arkay with his men and they watch as Saban performs the ritual. Seeing that the plan has failed and A'tor's soul is now in his sword rather than his body, Basil starts to leave, but Cyrus makes a powerful speech that changes his mind. Cyrus orders him to attack the harbor in an effort to empty the Palace, allowing Cyrus to enter and kill Lord Richton.

Restless League
Basil reveals that he knows nothing about Iszara's whereabouts and hoped Cyrus had found some answers in her journal. He tells Cyrus about the history of the Restless League since Iszara joined, the Battle of Stros M'Kai, and the Prince's death in that battle. He says the League obtained the soul gem and Iszara later took off with it. As Cyrus leaves, Basil warns him that the fate of the soul gem is a matter that concerns all of Hammerfell, not just his sister. Though Basil thinks Cyrus is a fool, he agrees with Vander that Cyrus may have what it takes to get the job done.

Iszara Restored
With Cyrus and Iszara safely back at the League hideout, Basil learns that they do not have the soul gem and is disappointed. Cyrus explains how N'Gasta tricked him into delivering the soul gem to Richton and Basil feels that there is no hope left of restoring the Prince. He says his men will be killed if they step on the shore; Cyrus thinks he is afraid, and Basil rebukes him with a short speech explaining how the League's discreet actions have made the Imperial occupation costly to the point where it might fail. Cyrus points out that Basil only really fears Richton's dragon and he assures him that he will take care of it. Iszara gives Cyrus the key and Basil tells him about Iszara's connection with A'tor. Though doubtful that Cyrus can kill a dragon, he promises that if he can bring back the Prince, his men will fight.

Sword of Crown
He appears alongside other League members during their infiltration of Stros M'Kai. Basil sneaks up behind a guard and slices his throat. Disappointed that Saban's ritual placed A'tor's soul in a sword, he prepares to leave with his men. Before he leaves, Cyrus gives a speech that makes Basil decide to fight and Cyrus orders him to secure the harbor and kill any other Imperials left after that.

"Is that your sword, boy? Goes nicely with the costume."

During fight with Vander:

Vander: "There's the bastard that spoiled my raid."
"That was you? I remember two jokers who couldn't handle their sabers, but you must have been hiding."
Vander: "You see me now, though, don't you?"
"Vander."
Vander: "Plain as day right here--"
"Are you Basil? You're a hard man to find."
"Mystery maintenance, Cyrus. What do you want?"
Vander: "We don't need to talk to him! Let me--"
"Listen here, spotlight, I'm not here for you. I know everything you have to say. Draw your sword anytime you're ready."

After the fight with Vander:

"I'm done with your bully boy. And I left him alive."
"And now the altruistic brother-pup wants his bone.
"First, here's a bandage. Tidy yourself up. Unless you were planning to use that sweet little puppy tongue to lick your wounds clean."
(Receive bandage)
"You like breathing, Basil?"
"Fine. Here's the key to Iszara's lodge. We've already ransacked it for clues to her whereabouts, but maybe you can find something we couldn't.
"Clues particularly in a journal, one we can't open.. If you can tell me what's in the journal, I'll tell you what I know about Iszara's disappearance."

If he has given you the key:

"Open the journal, then we'll talk."

"I expect to hear what Iszara says in her journal before I'll say anything more to you."

"Where is she?"
"Wrong strategy this early in the dialogue, son. The game is to find out what the other one knows first, not show how much of the map you can't read."
Vander: "Can he die, now?"
"Step off, shiny. We'll get to that in a minute."
"See, I thought you were Iszara's messenger boy, which would've granted a longer audience, but you're standing there looking like the last loose end of many."

"So you lead this band?"
"If you say so."
"So you plan to take on the Empire?"
"A'tor did that already and died for it. The Empire won't suffer us to live against her, or a history written without her name , so there's no point to resist so overtly."
"How very restless of you."
Vander: "Let me cut this smart ass."
"I'm not suggesting the League greet the Empire with open arms. I propose we greet them with secret arms, with subtle stings, with blood and coin spilt in stealth.
"Sublunar threat. Our purpose is to hint, ever so politely, that there is no profit in Hammerfell... And no prospect of profit.
"When the Empire despairs of getting rich in Stros M'Kai, she'll turn her hand to more profitable enterprises."

"Why are you still preying on Stros M'Kai?"
"My. How glibly you parrot Imperial propaganda. Perhaps an ignorant tourist like you wouldn't notice that we touch only the Empire's and Richton's ships.
"Excitable ship owners and Imperial fellow-travelers raise a hue and cry against plunder and piracy... But the people of Stros M'Kai know the real targets of our activities."

"I've seen the Cyrodiils expanding throughout the rest of Tamriel. You're not going to stop them."
"Hark! The wise man speaks! But let me advise you, that's the worst thing you could ever say to Iszara when you find her."

"If there's no point in resisting why do you stay here?"
"Hear that, Vander? The man thinks to probe my innermost thoughts. Should I share with him a list of my heart's desires?"
Vander: "Your list is too long, Basil. I'll tell mine. It's short... And to the... point!"
"Your list will be short enough, fool, if you pull that sword on me."

"I'm Iszara's brother, and all my loose ends have led me to you."
Vander: "She never mentioned a brother."
"And she's been part of us for a long time now. And from her omission of reference to you, I infer little pride or confidence in you...
"...A judgement that seems well-supported in the course of our brief and none-too-gratifying acquaintance."
Vander: "He has no idea where she is either."
"Shut up."
"He's got the same cordial manners as his sister, that's for sure."

"When and why would have Iszara ever joined you? Did her association with you get her killed?"
"There are some who cannot admit a demise, who in the face of defeat create theories of retaliation.
"But the secret of theory is that truth doesn't exist. Iszara disappeared appropriately into the very same void."
"I hope that meant something to you, because it gets me no closer to Iszara. I want to know what happened to her now."
"Wake up, sucker! We're thieves and we're bad guys. And Iszara was a part of it whether you like it or not.
"In case you didn't notice we're hiding out here, so it stands to reason if Iszara isn't here then she's in trouble.
"Don't you think the Empire might be able to help you solve this mystery a little better? You're wasting your time here."
"What kind of trouble would she be in?"
Vander: "He can't help us, Basil. It's my turn now."
"Come on!"