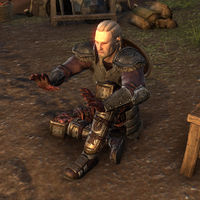 Vikord Skullcleaver is a Nord member of the Fighters Guild who was part of the security detail on Stirk and is part of the invasion of Coldharbour. Upon entering the realm, he was captured and taken to the Tower of Lies. He must later be freed from his imprisonment, along with Borgath and Sinfay.

After liberating the tower, he will find his way to the Fighters Guildhall in the Hollow City and will take part in the push against Molag Bal.

Vikord can be found warming himself by the fire along with Skordo the Knife and Darien Gautier. He will be frustrated by his current assignment.

"Bah! I can't stand this glorified guard duty. Give me a skull to cleave!"

After the Daedric attack, he will be assembled with everyone else, waiting for the portal to Coldharbour to be opened. He will still be enthusiastic about the topic of skulls.

"I'm ready to cleave some skulls! Do Daedra have skulls? I imagine they do, depending on which type we run into." 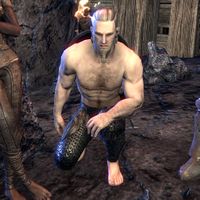 Vikord in the Tower of Lies

After Skordo asks you to find his friends, Vikord can be found tied to a pole in one of the caves on the bottom level of the pit.

Vikord Skullcleaver: "Skordo set up a rendezvous point in the north part of the pit. I'll see you there!"
<Once freed, Vikord walks over to a recently deceased prisoner.>
Vikord Skullcleaver: "Damn, she didn't make it. Find your ancestors, friend. And know that Vikord will avenge you."

Once you have dealt with the Overseer, Vikord will be waiting at the meeting point outside the Liar's Passage with Sinfay and Skordo.

"Good luck, friend. Save a few ogrims for us. We'll meet you upstairs as soon as we can."'

If you speak to him after entering the Liar's Passage, then exiting it before getting into contact with the captain, he'll say:

"You rescued me from a fate worse than death. I owe you, friend."

While you are looking for Captain Eilram, Vikord will make his way to Captain Arakh's camp with the others. He will be sitting by the fire with Sinfay.

Inside the Fighters Guildhall, he will be drinking from a mug after being rescued and can be spoken to:

"I went days without a sip of mead when we were in the Tower of Lies."

He and Sinfay will be guarding the way to the portal to the second tier of the Chasm. They will have a wager going on.

"Sinfay thinks she can beat a Nord in a contest? Especially a killing contest? Ha! By the time we're through, I'll have more Dremora hearts than I can carry!"

After taking the Chasm:

"Killing Dremora is thirsty work. I need a mead!"