I found a flier for a traveling menagerie in Rimmen. I should investigate.
or
A Khajiit named Tahara asked me to find an escaped monster called Burtle. She promised to pay me handsomely for its safe return.

Tahara can be found on the west side of the Rimmen Artisans District, next to her cart and beasts. If you've traveled through Khenarthi's Roost before, you may remember her menagerie from Mistral. Speak to her and she'll apologize for having to delay her show. 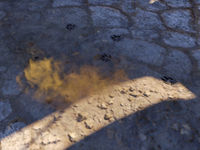 If I crouch down, I should be able to find signs of the beast's passage.

"A hundred apologies, walker, but the show is postponed for now. If you purchased a ticket, this one will gladly refund your gold."
Is there a problem?
"Forgive Tahara. Her worry gets the better of her.
One of my menagerie's most terrifying beasts escaped from its cage! I turned my back for only a moment to speak to an onlooker, you see? And pow! The monster burst free!"
What kind of monster are we talking about?
"A vicious beast, with ravening jaws and beady black eyes! The Breton Tahara bought it from called the creature Burtle, but do not let its silly name fool you.
You seem capable. If you find Burtle, I will gladly share some of my profits with you."
All right, I'll find this Burtle and bring it back.

Small yellow-ish clouds lead the way to Burtle through the district, and crouching reveals footprints, bones, and other trail markers. As you follow them past the wayshrine, a passerby steps in some leavings.

Tersius Municus: "Oh, for the love of—Dog droppings? All over my new sandals, too. Damn!" 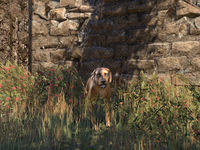 I found the "monster," Burtle, hiding near the market.

You eventually find Burtle just to the northeast of the Shrine of the Cats Divine, though he won't come out from his corner unless lured out by some food. Heading into the Baandari Bazaar, you can find Jahlar by the achievement furnisher. You can steal his bag of lunch from behind his bench but there will be several people watching that area, which makes it risky choice. Otherwise you can talk to Jahlar and convince him to part with his lunch, either by paying for it or threatening him.

"Jahlar hopes you have a good reason for interrupting his meal."
I couldn't help but notice your fine Khajiiti food.
"You're either the best-dressed beggar I have ever seen, or this is some kind of con. What's your game, walker?" 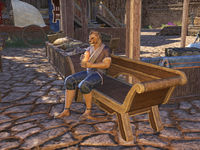 You need to find some food for Burtle
[Intimidate]: Hand over the lunch or I knot that mangy tail of yours around your neck.

"Ziss'vo! There is no need for that!
Take the damned stuff. I don't care. It isn't even that good!"
That's what I thought.
"This one has nothing more to say to you. Leave me be or I will summon the guards!"

"What? You want to buy this one's leftovers? That is … odd, but you've got a deal.
I've been wanting to try out some of the sugared jerky from the stall down the row, anyway. All yours, walker."
Pleasure doing business with you.

With the Odoriferous Meal in hand, return to Burtle. After luring him out, he will follow you back to Tahara, who is overjoyed at his return and will give you your reward.

"My hero returns with the dread Burtle in tow!
Surely, the creature is under some powerful spell. Your magicks astound even me!"
Right …. I have your dog.
"Indeed you do! The Gorger of Glenumbra, captured once more! Its bestial intellect swayed by the promise of grisly table scraps!
Ziss'vo, could you work with me here? It's part of the mystique. Just take your gold and act astounded, all right?"