The UESPWiki – Your source for The Elder Scrolls since 1995
< Online: Places: Reaper's March / Docks / Group Bosses
Jump to: navigation, search 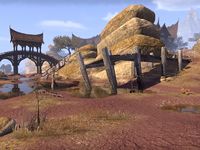 Old S'ren-ja Docks is a derelict pier, south-southwest of S'ren-ja in Reaper's March. There are rumors in S'ren-ja that crocodiles in this waterway have made people gone missing recently. This can be explained by the actions of Lauron, who was a researcher who tried to control crocodiles and end summoning a powerful daedroth. Resulting from those experiments, crocodiles went mad and attacked some S'ren-ja people.

Defeat the Daedroth, Ysolmarr the Roving Pyre, near the Old S'ren-ja Docks in Reaper's March.

To clear this location and mark it as complete, you need to kill the following bosses:

This Online-related article is a stub. You can help by expanding it.
Retrieved from "https://en.uesp.net/w/index.php?title=Online:Old_S%27ren-ja_Docks&oldid=2134195"
Categories:
Hidden categories: