The UESPWiki – Your source for The Elder Scrolls since 1995
< Elder Scrolls Online: Places: Cyrodiil / Bodies of Water / Unmarked Locations
Jump to: navigation, search 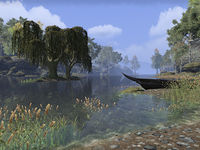 The Niben River is a river in southeastern Cyrodiil, running between Dominion and Pact territories. The river is swarming with slaughterfish, meaning it is not feasible to swim directly across it. Instead, three bridges span the river connecting the territories; Alessia Bridge in the north, Bay Bridge in the south, and Niben River Bridge between them. With the introduction of destructible bridges in Update 20, a ramshackle crossing was also added at Lunar Fang Docks which cannot be destroyed, and the river was widened and banks steepened in some areas to further inhibit crossing elsewhere. Slaughterfish Warning notices can be found all along the river.