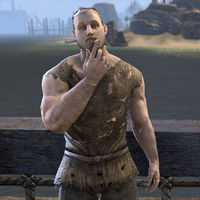 Majoll is a Nord who is initially found in the Screaming Mermaid in Port Hunding. He is a big 'fan' of Jakarn and will join Captain Kaleen's crew with him. He has many desires of 'sweating shirtless in the hot sun' with Jakarn and wishes to adventure with him. After Betnikh he joins up with Captain Marck.

Approach Jakarn's spot in the Screaming Mermaid, you'll find Majoll among his "court". Speak to him and he'll tell you:

"I don't believe a word Jakarn says, but there's just something about him. He's fascinating."

Once you arrive on the island, you'll find Majoll crouched behind some boulders near the Stonetooth Smithy:

"Excuse me, but I'm meeting someone. Alone. Please be on your way."

However you can still ask him about why he joined the crew.

After finishing the story on Betnikh:

"I can't believe he stood me up. The nerve. I mean... just that I was looking forward. To working with him.
Bah! That's it. I'm done!"

Next to the middle mast on the Spearhead at the southern docks in Daggerfall after finishing the story on Betnikh:

"Ha. Those ladies are such fools! Jakarn and I have already agreed.
We're going to run off together and have grand adventures! "

"Now you're a welcome sight!
I'd chat, but Captain Marck has me testing all the rigging before we set sail again. I'd imagine the debacle at Koeglin Lighthouse made him a bit more cautious."

Majoll can be found with Andrilion on the roof of the inn, sharing their mutual misery. Later, Vimy gives Andrilion the means to go home, and he leaves. You can ask Majoll about it.

"My friend! My friend. Oh, it is good to see you. I have had the most horrid month."
What's wrong, Majoll?/Why are you drinking out here?
"Jakarn. We traveled together to ruins off the coast of Vvardenfell. We braved many a danger, he and I, all to recover a Daedric relic none have ever seen.
It was glorious, for a time."
Did you find this relic?
"We did. Together. I had thought we were going to sell it, but then I learned the truth. Jakarn only wanted the relic to impress the smuggler queen, Captain Lerisa. Lerisa!
I thought we had … well, I thought we had more than that."
So you and Jakarn aren't working together any longer?
"Would that we could! But no. Our cooperation is quite finished.
I will drown my sorrow in ale for a few more days. Then, I will try to find another ship. What else am I to do?"
Where's Andrilon [sic]?
"That lucky bastard finally got to to go home. Vimy stopped by. Apparently, she had a big score on Sentinel's docks. She gave Andrilon [sic] the money to book a trip home.
She's a nice girl, that one."