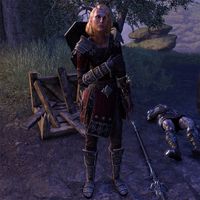 Lucilla Caprenia is an Imperial Battlemage recruit who has ventured to The Dread Cellar from the Battlespire with Martus Tullius, her commanding officer.

Lucilla is first encountered defending herself from cultists with Martus and Imperial Soldiers. If spoken to before accepting the quest from Martus, her greeting will be:

"I—I'm all right, traveler. Nothing I can't tend to. I wish I could say the same for our retinue.
I'm sure you have questions, but Martus is the one in charge. Speak to him."

When spoken to after accepting the quest, her greeting will be:

"You're going to be our new escort? After seeing what happened to our retinue? You must have a confidence I don't share. We should head back. Get reinforcements. An actual attack force."

Who are you two?

"I'm Lucilla. That's Martus, my commanding officer. You probably could have guessed from our uniforms, but we are Imperial Battlemages. Well, he is. I am still a potential, in training."
Can you tell me more about your order?
"Has the Battlespire been forgotten already? There really won't be anything left of the Empire by the time the Three Banners War ends. We are, or were, the elite war mages of the Imperial Legions. I didn't join for the glory, but that's disappointing."
What is the Battlespire?
"The fortress of all fortresses. Where the strongest mages in the Empire reside and train. It intersects with several planes of Oblivion, or so I'm told. My initiation trial will send me on a journey through them. If I survive, I'll be inducted."
If you survive?
"Many don't, but fewer still are even granted the right to attempt the trial. I'll have to prove myself capable many times over before I'm given my opportunity. If I can't pass the trial by the time I can take it, I didn't adequately prepare."

What can you tell me about our mission?

"Very little. Martus said our orders are simply to investigate the source of the magical disturbance that our informant spoke of. Anything else about this place is a state secret, apparently."
Your informant?
"A Dremora, if you can believe it. Called herself Lyranth. Most people wouldn't trust the word of a Daedra, and they'd be wise not to, but at the Battlespire we deal with the inhabitants of Oblivion more than most.
Martus believed she was truthful."
But you feel otherwise?
"It's just... she's not forthright. She gave us this lead if we agreed to share our findings with her. So, I don't question Lyranth's information, I question her motives.
At any rate, she wasn't wrong about there being cult activity here."

What about your injury?

"Hurts, but nothing a little magic won't patch up. I wish our retinue had fared as well. That ambush cut them down before they even knew what hit them.
You're ready to face the sort of enemy that can kill trained soldiers like that?"
I'm accustomed to danger.
"I hope your confidence is merited, for all our sakes. Martus is a veteran battlemage, and I'm far from helpless. But even with your help, storming this prison seems like a suicide mission.
If you decide at any point to turn back, I'll support you."

needs all her quest dialogue

(?): "Protect it! For the glory of Lord Dagon!"
Lucilla Caprenia: "He said "protect it." Do you think they've finished it? Their Cataclyst?"
Martus Tullius: "Likely. Look for anything that might tell us what it is."
Martus Tullius: "You, keep going. We'll be able to regroup with you a little farther ahead."

Martus Tullius: "We stopped its harvesting, at least, but I feel far greater concentrations of this power ahead."
Cyronin Artellian: "Is that you, Martus? I thought you'd lost your appetite for screams."
Lucilla Caprenia: "A battlemage? Martus, you know him?"
Martus Tullius: "Whatever you've gotten yourself involved in, Cyronin, it ends here."
Lucilla Caprenia: "Let me handle the big rock, you worry about him!"
Cyronin Artellian: "If you listen carefully, you can still hear all their screams."

"I'll handle the atronach! Kill that damn mage!"
"Get behind me! I can block that energy!"[verification needed]
"Atronach's down!"

Martus Tullius: "The Daedra are pouring their energy into that machine!"
Lucilla Caprenia: "There are more of them coming!"
Martus Tullius: "Over there as well! Lucilla and I will hold them back. Stop that thing!"
Magma Incarnate: "Let this world be shattered for the glory of Mehrunes Dagon!"

Following the defeat of the Magma Incarnate:

Choice dialogue at the end of the quest 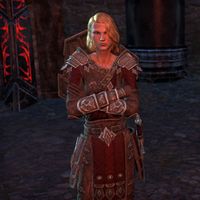 Lucilla in the Antecedent Cataclyst chamber

I won't stop you from leaving, but you shouldn't kill Martus.

"You're right. I shouldn't let his misdeeds stain my honor anymore than they already have.
Here, take this as a payment for your assistance. You should go before Martus drags you into anything else."

"I don't like that look of pity he's giving me, but at least Martus doesn't look like he'll stand in my way.
I hope you and I cross paths again someday. Him, not so much."

What will you do next?

"Disappear for awhile. I'm sure the Spire won't appreciate my desertion, but I can't imagine they'll spend much effort looking for me. After that, find a cause worth fighting for. Something that will allow me to do real good."

Will you ever forgive Martus?

"I'm not the one he needs forgiveness from. If the Divines see fit to show him mercy, that's their prerogative. I intend to forget him."

This Elder Scrolls Online-related article is a stub. You can help by expanding it.
Retrieved from "https://en.uesp.net/w/index.php?title=Online:Lucilla_Caprenia&oldid=2504445"
Categories:
Hidden categories: