The UESPWiki – Your source for The Elder Scrolls since 1995
< Elder Scrolls Online: Places: Unzoned / Groves
Jump to: navigation, search

The rugged peaks of the Jerall Mountains divide Cyrodiil from Skyrim. A few passes cross the mountains, granting loggers and trappers access into the deep backwoods. 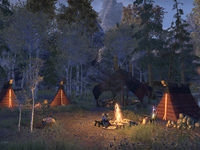 Jerall Mountains Logging Track is a forest located somewhere between Cyrodiil and Skyrim. It's filled with dire wolves and Silver Dawn trackers, as well as dozens of raw material nodes.

The caravan arrives in the southeastern area, and this is where the Caravan Master will wait for you. You can return to Anvil at any time by speaking to the Caravan Master, or simply by walking down the path behind her.

In the southwest corner lies a ruined home, where Vallric can be found. He only seems interested in the exhausted fireplace, but will respond if interacted with. 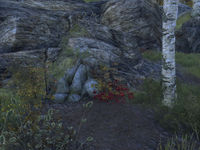 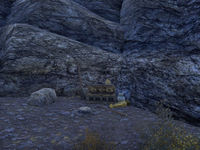 Expanding the pass, or burying loot?

The Silver Dawn camp is in the north. On a table under the largest tent, you can find "Silver Dawn Contract", offering some insight into what occurred between Hildegard and Chanter Nemus. Just southeast of the camp, at the base of the rocky hills and surrounded by four birch trees, is a traditional Nordic grave marker: a pile of stones with the fallen warrior's shield resting against it. The pass narrows as you head north of the camp, eventually coming to a sudden left turn where the path ends. Pickaxes rest against the stone, as well as a decent haul of loot. Whether the Silver Dawn were attempting to expand the pass, or simply looking for a place to stash their valuables, is unclear.

This Elder Scrolls Online-related article is a stub. You can help by expanding it.
Retrieved from "https://en.uesp.net/w/index.php?title=Online:Jerall_Mountains_Logging_Track&oldid=2388252"
Categories:
Hidden categories: