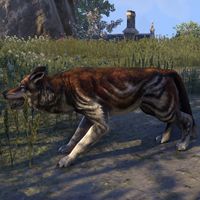 Dire Wolves are a larger variety of wolf found in Tamriel's wilderness. They can be found in the Gold Coast, Elsweyr and Summerset. They can also be summoned by Spriggans and pet rangers.

Their coats appear in a variety of colors. Grey dire wolves often appear in packs in grasslands, orange dire wolves with red eyes may sometimes be found guarding their pups in tropical areas, brown dire wolves can be found in Elsweyr and black dire wolves are encountered in the Hunting Grounds. Werewolves who have the Pack Leader morph can summon two dire wolves to fight by their side.

Striped dire wolf pups can be found by the Event Exchange near Alinor. 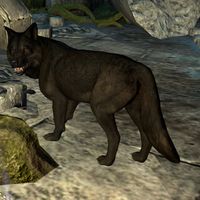 This Online-related article is a stub. You can help by expanding it.
Retrieved from "https://en.uesp.net/w/index.php?title=Online:Dire_Wolf&oldid=2217932"
Categories:
Hidden categories: