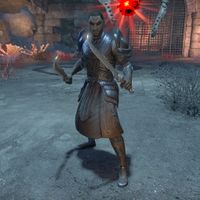 Dranos Velador is a rogue Dunmer assassin who founded the Silken Ring in service to Mephala. He can be found in the Cradle of Shadows, where he acts as the fourth boss. 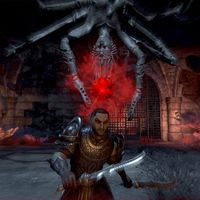 As a boss type NPC, Dranos is immune to all forms of crowd control abilities.

Carve
Dranos slashes at the player with his dagger dealing moderate physical damage. If taunted the boss will be forced to use this attack on the tank only.

Bleed
A moderate physical damage over time applied by Carve.

Blade Weaver
Dranos will spin around after a short windup, doing damage around him as indicated by a small red circle. Even though the block telegraph comes up it is recommended for all players especially non-tanks to dodge this attack, as it deals a massive amount of damage to tanks even when blocked.

Searing Seal
Dranos teleports to each player and places a fiery glyph on the ground under their feet as indicated by red circles. This deals moderate magical damage over time.

Fangs of Mephala
Immediately after Searing Seal, Dranos will teleport to a player (usually the tank) and two Gloom Wraiths will appear and stun that player. Other players must interrupt these NPCs as soon as possible to free the player, and the targeted player has to block the incoming heavy attack. Again, this attack deals massive damage, and non-tanks are likely to die even if they block. Rolling at the moment he swings may help you avoid death.

Summon Shade of Dranos[verification needed]
At approximately 66% and 33% health Dranos will become invincible and four Shades of Dranos will appear around the room to attack the group. Killing the Shades will cause them to drop an Essence of Velador. Touching the Essence will return it to the boss, and once all four Essences are collected the boss will be stunned momentarily, after which he will be vulnerable again. The boss will continue to attack the group as per normal, so this phase has to be dealt with quickly. If the boss himself touches the Shades they will return to him, this may allow the group to quickly bypass this phase if the tank uses Fiery Grip or similar abilities to pull all the adds towards the boss. Killing Dranos without killing the Shades will award an achievement.

Orb of Spite
The Statue of Mephala in the center will release orbs of magic that explode in a large area as indicated by a red circle, dealing high magical damage. This has to be avoided at all costs.

Wrath of Mephala
When the boss is low on health, the Statue of Mephala will instead emit constant waves of magic, dealing moderately high magical damage. Players are advised to stay near the edges of the room to avoid being hit by these waves.

After defeating the Votary of Velidreth, Hides-the-Ashes enters the room:

Hides-the-Ashes: "I heard screeching. Giant spiders? No surprise there... wait."
<She notices a grate. You can see into the room below through it; the room behind the door you unlocked with the lever.>
Hides-the-Ashes: "It's the Ring's field captain, Dranos Velador and... no. No, no, no."
<She sees Tsatva-Lan standing before Dranos Velador, surrounded by his dead fellow Shadowscales. Dranos is flanked on both sides by four Spiderkith.>
Tsatva-Lan: "It is done, Velador. The remaining Shadowscales are dealt with."
Dranos Velador: "I'm afraid you're mistaken, my friend. Another member of your tribe has breached the gates."
Tsatva-Lan: "Hides-the-Ashes. If she is here, she will die like the rest. Now, you wanted proof of my loyalty? Bear witness."
Geel-Ma: "Tsatva-Lan, what are you—? You do not need to do this!"
Geel-Ma: "No!"
<Tsatva-Lan stabs Geel-Ma, killing him instantly. His corpse glows with an ominous red aura, and the Spiderkith begin channeling that energy.>
Dranos Velador: "Well done, my scaled friend. You have cast off your old skin, and the Silken Ring welcomes you as a brother. Seek out Velidreth and receive your blessing."
Hides-the-Ashes: "I need a moment to... sort this out. Kill that smoke-skin bastard, Dranos, and we'll regroup afterward.