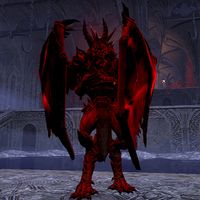 The Blood Twilight is a grievous twilight summoned by Talfyg after he steals some of Gwendis's essence. It appears in the Garden Conservatory of Castle Thorn, and serves as the second boss of the dungeon. 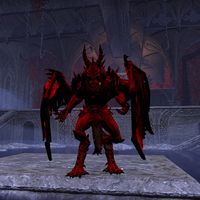 The Blood Twilight engages the group up close during this phase. The change of phases is on a one-minute timer.

Dark Barrage
The Blood Twilight attacks one person by rapidly shooting purple bolts at them. The tank can get in front of the target and absorb the damage by blocking. Alternatively, the healer should go nuts to keep the target alive. However, the former is the more viable option. To best mitigate the damage without having the tank block in front of the target, the target should block, set up damage shields and make use of whatever heals they or the healer can throw at them. Attempting to survive without the help of a tank is not viable on Veteran difficulty.
Shadow Strike
The Blood Twilight teleports and slams down upon its target, dealing devastating physical damage. This can be survived by blocking, warding and healing on normal, but on Veteran, the Twilight should be focused on the tank to prevent weaker group members from being killed in one shot.
Summon Blood Channeler
Summons four Blood Channelers on all four sides of the room to empower the Blood Twilight. Kill them as soon as possible, they channel a beam into the Blood Twilight that causes it to deal more damage.
Blood Mines
Blood mines are occasionally summoned after the Blood Channelers die. Stepping on these mines deals magic damage. Try to avoid them; they're very obvious, and look like little red lumps sitting on the ground.
Threshing Wings
The Blood Twilight hits its target with its wings.
Blood Slash
The Blood Twilight slashes you with its claws, dealing major physical damage.

The Blood Twilight hovers above the center of the arena, becoming invulnerable and causing a pool of red Ichor to rise beneath it. A Reanimated Vampire is summoned during this phase. The change of phases is on a one-minute timer.

Ichor
Standing in the ichor applies a slowing debuff, and deals a lot of magic damage over time. Stay out of the ichor. If you get hit into the pool, there are stairwells that you can climb to get out of it. Mitigate the damage as best you can as you make your way back up.

Blood Channelers
If there are any Blood Channelers alive during this phase, now would be a good time to take them out, as the Blood Twilight itself will not face you to deal any damage.

This Online-related article is a stub. You can help by expanding it.
Retrieved from "https://en.uesp.net/w/index.php?title=Online:Blood_Twilight&oldid=2188686"
Categories:
Hidden categories: