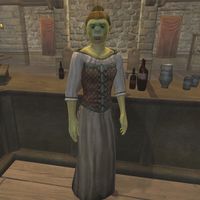 Mog gra-Mogakh is the Orc publican at the Two Sisters Lodge in Skingrad and sells food and beds. Her sister, Ugak, sells horses at the Grateful Pass Stables outside the city. Mog serves the Lodge all the time, never eating or sleeping.

She wears a set of middle class clothing consisting of a quilted doublet, light brown linens and a pair of thick cowhide shoes. She also carries a small amount of gold.

Speaking to Mog gra-Mogakh for the first time while in her inn will have her greet you by saying; "I'm Mog gra-Mogakh, proprietor of Two Sisters Lodge. My sister and I own this place. 'Two Sisters', see? Need a bed? Good food?" Asking her about her sister, Ugak gra-Mogakh, will have her reply by saying; "My sister, Ugak gra-Mogakh, runs the Grateful Pass Stables. She's the quiet one. I'm the talker." Speaking to Mog gra-Mogakh about Skingrad, before you start to escort Brother Martin to meet Jauffre, will have her say; "Don't count on seeing the Count at the castle. He's a great sorcerer, but he doesn't like visitors." Asking her about Skingrad, after you convince Brother Martin to travel with you but before you end the Oblivion Crisis, will have her reply by saying; "I'm not worried about the Gates. We'll be safe enough inside the walls." Claiming that walls didn't help Kvatch will have her deny that her city is at risk. "Well. The guards must've been careless. But Captain Dione [sic] has the guard on full alert. We'll be safe." Claiming that it is possible that Skingrad will be safe will have her reaffirm her previous statement; "Certainly so. Captain Dione [sic] knows her [sic] business. And no enemy has ever made it over Skingrad's walls." Asking her about vampire hunters as part of the quest Information at a Price will have her tell you about her most recent patrons. "A smelly lot, if you ask me, but their gold is as good as anyone else's. We can wipe down the rooms afterwards. They're in here to eat every afternoon, and bed down just before midnight. Outside of that, it's none of my business."

Asking Mog gra-Mogakh if she has a bed available for the night will have her reply by saying; "You need someplace to rest? I can rent you a room for the night for 10 gold." Claiming that you do not want a room after all will have her accept your decision, and occasionally remind you to speak to her again about this if you change your mind. Saying that you want a room without enough gold to pay for it will have her angrily reply; "No gold, no room. Sorry, but that's the way it goes. I don't make exceptions." Asking for a room with sufficient funds will have her accept the payment, and point you in the direction of your room. "Okay then. It's upstairs, the room at the west end of the hall. That's to your right when you come out the door. Enjoy." Asking her about the room while you are still renting it will have her ask if you are enjoying the room. "The bed's comfortable, right?" Despite her question about her room's quality you will not be able to respond to this question through dialogue.