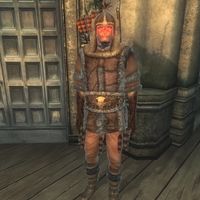 Geel is an Argonian sharpshooter working at the Blackwood Company in Leyawiin. He doesn't have much to say, but you may have to kill him along with the rest of the Company during the last quest for the Fighters Guild.

He is equipped with a set of leveled light armor, some of the pieces may be enchanted. He is armed with a leveled bow and arrows, and also carries some iron arrows. He carries a spare set of middle-class clothing around with him, along with a spare pair of upper-class shoes and some gold.

He is responsible for locking and unlocking the guild hall doors. At 6am he unlocks the front door and at midnight he locks it again. His entire time is spent walking around the ground floor. Geel neither eats nor sleeps.

When you first greet him, Geel will tell you that "I am Geel. Sergeant-of-Sharpshooters, Blackwood Company." and when asked about Leyawiin, he says "Here I train our skirmishing specialists. You know, perhaps, that Argonians may be gifted spellcasters."