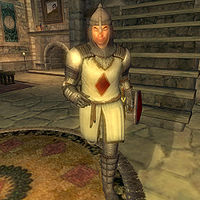 Brellin is a Bosmer crusader added by the Knights of the Nine official plug-in.

When you first meet Brellin he will wear leather boots, greaves, and cuirass. Once recruited he wears the same armor as all other Knights of the Nine: chainmail boots, gauntlets, greaves, and helmet with a Knight of the Nine Cuirass and a Knights of the Nine Shield. He sleeps in sack cloth pants a collared shirt and a pair of rough leather shoes. In combat he wields an elven shortsword. He carries a hoe for tending to the garden during his downtime between adventures. Brellin also knows a leveled set of crusader spells, as well as one extra minor restore health spell.

He claims to hail from Silvenar, in Valenwood, and is a devout follower of Auri-El. He appears at the Priory of the Nine and requests to become a Knight of the Nine after you have completed The Sword of the Crusader quest. Once he is a knight, his name becomes Sir Brellin.

When you first meet Brellin, he will state his name and offer his services to the Knights of the Nine: "Sir Knight, allow me to introduce myself. I am Brellin of Silvenar, at your service. I come to offer myself as a knight in service of Auri-El, or Akatosh as he is known in Cyrodiil. I bring nothing but my skill with the blade, which is not inconsiderable, and my devotion to the Lord Auri-El. Will you accept me, as unworthy as I am?" If you accept him into your order he will honored that you accepted him as a Knight of the Nine: "I am honored to join the Order under your illustrious command. Excuse me while I go the armory and attire myself as befits a Knight of the Nine." If you deny him membership he will calmly accept your decision, and remind you that he will remain in the Priory in case you change your mind at a later date: "You are no doubt correct. I will continue to train and meditate here at the Priory until I become worthy to serve Auri-El."

Should Sir Brellin die in combat, his fellow knights will reminisce about him: "I can't stop thinking about Sir Brellin. About how he died..." and "Do you remember Sir Brellin? His death still troubles me, at times. I don't know why. A knight should not fear death, and yet..." He will be replaced by a generic respawning Knight of the Nine, an unnamed male Nord.