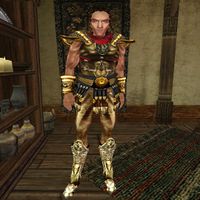 Sellus Gravius, an Imperial Guard officer, is an emissary attached to the Census and Excise Office in Seyda Neen, and a Knight Errant of the Imperial Legion. He is the last person you speak to before leaving the Census and Excise Office in Seyda Neen at the beginning of Morrowind. He takes the release papers that Socucius Ergalla gave you and gives you a letter, some coin for your pocket, and a package for Caius Cosades. Aside from his natural abilities to charm and to absorb fatigue from others, he knows no spells. If you have installed the Siege at Firemoth official plugin, he is the person to talk to in order to start the quest.

He carries an Imperial Broadsword and is wearing a full set of Imperial Templar Armor (excluding the helm), as well as common pants.