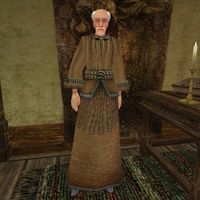 Socucius Ergalla, a Breton agent, is the chief agent of the Seyda Neen Census and Excise Office. In addition to helping you at the beginning of the game to select your character's class and determine which sign your character is born under, Socucius provides you with your release papers, which you must give to Sellus Gravius before you can leave. Socucius is also interested in the whereabouts of a missing tax collector, Processus Vitellius, and will offer medium training in Acrobatics, Light Armor, and Sneak.

He wears a common robe and shoes. He also carries a small amount of gold and a steel shardblade with him. Aside from his natural bonus and resistance to magicka, and his ability to shield himself for short periods, the only spell he knows is Crying Eye.