Shattered Grove is a little sleepy town located in central Auridon, over the western hills of Calambar, west of Skywatch, northwest of Mathiisen and south of Dawnbreak. 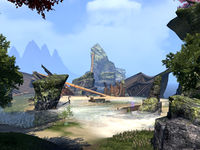 Shipwreck on the coasts of Shattered Grove

Shattered Grove is located in a heavily forested and hilly area of eastern Calambar. The unwalled settlement lies in the middle of exotic and paradisiacal woods. Vast deciduous forests of laurel, maple, and larch trees grant the land a lush but unkempt appearance. Along the boundless tracts of unspoiled wilderness, wild bears and wolves hunt, along with gemlike arachnids.[1][2]

The jagged cliffs of white granite to the west of the town face Summerset Isle, and are known to be treacherous and have made more than one ship wreck,[3][1] but this coast also offers some secluded coves.[2]

It is unknown when Shattered Grove was exactly founded as a settlement. It could have been as early as the Middle Merethic Era, when Torinaan first landed in Auridon, to as late as the Second Era, when Shattered Grove was a well-established Altmer settlement.[4][5] However, the magic stone monoliths appear to have always been in the woods around the town and nobody knows who erected them or when.[6]

Merormo was an Altmer wizard from the Skywatch Mages Guild who was no longer welcome in the Mages Guild and was dismissed by Telenger the Artificer due to many ill-fated and dangerous experiments.[7] He exiled himself to Shattered Grove and built a tower of his own in the middle of the woods to continue his works during the mid-Second Era.[6] 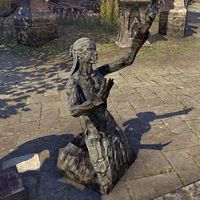 A petrified villager of Shattered Grove

In 2E 582, animals around Shattered Grove suddenly turned aggressive and the villagers were literally petrified. Merormo had turned the villagers to stone to protect them from the animals, who he had believed to have become possessed by a powerful Daedra, who was using the monoliths in the wood. His attempt of direct manipulation of the monoliths did not work, however, after capturing one of the bears, Merormo attempted to banish the Daedra, and instead, the bear transformed into a flame atronach.[8][6] In a nearby cave, the Vestige discovered Akata, a powerful Dremora, responsible for the corruption of the wildlife near Shattered Grove and originally summoned by Merormo to create an army, and killed her, ending the Daedric influence over the town. Merormo's original purpose was utilize his Daedra army to end the Three Banners War or, at least, allow his nephew, who had been sent to the front lines, return home. After being forced to restore the villagers, the wizard was captured and was put to trial by the Canonreeve. The final fate of Merormo is unknown.[9][6]

By the Second Era, Shattered Grove had been shrinking slowly, losing villagers from time to time. Especially after Merormo moved to the town and began his experiments.[10][11] 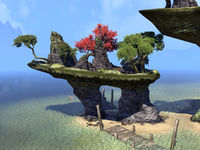 A smuggler's cove on the coasts of Shattered Grove

In the secluded coves and beaches between the cliffs of the western coast, smuggling operations are known to be made by the locals.[12]

The town provides very few services, with a local smith,[13] and a leatherworker being the only known services in 2E 582[14] Shattered Grove has been an integral part of the realm of the Summerset Isles since its foundation. A Canonreeve is tasked to rule the settlement.[15]

The local fauna is known across Auridon to be very friendly towards people, from critters to bears due to the influence of an unknown kind of nature magic throughout the woods, channeled through various stone monoliths.[6] The animals even let the outsiders pet or feed them.[16][17] Both commoner and noble Altmer appreciate the hunting Shattered Grove provides, due to the characteristic behavior of the animals.[18][17] However, Shattered Grove is also considered by some nobles as nothing more than a horrible backwater village.[19]