The UESPWiki – Your source for The Elder Scrolls since 1995
< Elder Scrolls Online: Quests: Auridon / Side Quests
Jump to: navigation, search

I discovered a statue outside the small town of Shattered Grove. The statue is remarkably lifelike and warm to the touch.

When approaching Shattered Grove, you may notice that the animals have an unusual red glow around them. You will also find three statues—Halino, Lamolime, and Ocanim around the village. Interacting with the statues will reveal that they are eerily lifelike and warm to the touch.

<The statue is almost flawless, a perfect representation of a living person.>
<Look closer.>
<The statue is warm to the touch.>
<Something isn't right here. Perhaps something happened in town.>

Head into the center of Shattered Grove where you will find a lone mage attempting to cast spells on one of the statues. Talk to Merormo to see what he knows and why he isn't petrified. 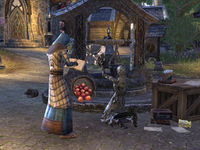 The village is filled with statues and a very distracted mage. Perhaps he knows what happened to these people?

"Hmm? Who are you? Wait. Not important.
You're new. And not a statue. I can use that."
What happened to all of these people?
"Ah … yes. I did it. I turned them to stone. But for a good reason!
It was the only way to protect them from the savage beasts."
What savage beasts?
"The animals here are normally very tame. Energies in the wood. Now they're vile and bloodthirsty. I believe they've been possessed by Daedra."
Why did you turn the people into statues, though?
"I lost some of my apprentices to the beasts. So when I made it back to town, I cast a spell that would protect everyone. It was the only way."
All right, then. How do we fix this?
"As long as those creatures prowl the woods, we're in danger. I believe the monoliths in the woods have something to do with the Daedric influence.
Dispel their energies. Hopefully that will free the animals."
Dispel the energies around the monoliths. Right. 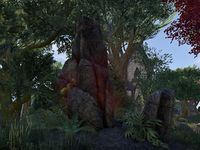 A monolith polluted with Daedric energy

Merormo explains that he turned the villagers to stone to protect them from the animals, who he believes to have become possessed by daedra. He thinks that the daedric influence has something to do with the monoliths in the woods and wants you to dispel them. There are four monoliths in total which can be found in the nearby woods, beware of the crazed wolves and bears. Once you have dispelled the fourth monolith, Meramo will teleport in your vicinity.

Merormo: "I sensed the field disperse. I would speak with you." 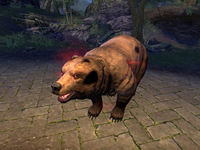 Merormo needs a bear to act as a test subject.

You can then speak to him to see cleansing the monoliths helped at all.

"The energy subsides. But the animals are still savage monsters. We'll have to try something else.
We need a bear."
What now?
"I've spent some time studying these monoliths. I've managed to create a little magical fob that imitates their energy.
Essentially, it will make one of the ursines your furry friend. For a time."
Why do I need a furry friend, again?
"I need to—we need to—extract the Daedric energy from these beasts. To do that, we'll need a test subject.
You'll have to rough the furry fellow up a bit first. Weaken him for the spell to work."
All right. I'll collect a bear for you.
"Meet me at my tower with your friend. Just follow the road through the grove."

While the animals are still savage, Merormo has something else he wants to try but the mage needs a test subject. Using the Binding Gem he gave you, fight a bear until it is weakened enough to be enthralled. You can then lead it to his tower, which is near the southwestern monolith. When you enter the tower, will be ready to begin the banishing ritual.

Merormo: "Ah, good. Now let's see if I can banish the Daedric influence from this creature." 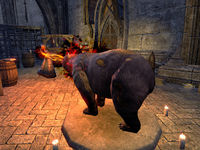 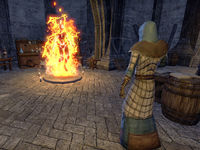 "Hmm. That should not have happened."

Meramo will fire a beam of energy at the bear, the bear will then catch on fire and burn to death. A Flame Atronach will then appear from the ashes, only for it as well to become a burnt husk.

Merormo: "Hmm. That should not have happened."

The ritual did not go as planned, talk with Meramo to see what he has to say.

"This will not do. Something here is very wrong."
What was that?
"A Flame Atronach. My spell should have sent it screaming back to Oblivion.
But something else interfered."

You will then receive some gold. If you continue speaking with Merormo, he will ask you to kill the powerful Daedra that is causing the chaos.

This Elder Scrolls Online-related article is a stub. You can help by expanding it.
Retrieved from "https://en.uesp.net/w/index.php?title=Online:Silent_Village&oldid=1951947"
Categories:
Hidden categories: