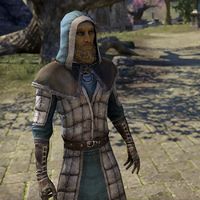 Merormo is an Altmer mage who lives near Shattered Grove. The recent hostility of the local wildlife led to him petrifying the inhabitants of the village in a bid to protect them from the Daedra-possessed animals.

However, you will eventually learn that the daedra problem was due to his own experiments, which incidentally resulted in the deaths of many of his apprentices. Merormo was trying to create animal soldiers which could replace the soldiers fighting in the Alliance War.

After starting your investigation from observing one of the petrified people, or speaking to Merormo himself, you can find him repeatably casting spells on the "statue" of Canonreeve Pinanande.

"Hmm? Who are you? Wait. Not important.
You're new. And not a statue. I can use that."
What happened to all of these people?
"Ah … yes. I did it. I turned them to stone. But for a good reason!
It was the only way to protect them from the savage beasts."
What savage beasts?
"The animals here are normally very tame. Energies in the wood. Now they're vile and bloodthirsty. I believe they've been possessed by Daedra."
Why did you turn the people into statues, though?
"I lost some of my apprentices to the beasts. So when I made it back to town, I cast a spell that would protect everyone. It was the only way."
All right, then. How do we fix this?
"As long as those creatures prowl the woods, we're in danger. I believe the monoliths in the woods have something to do with the Daedric influence.
Dispel their energies. Hopefully that will free the animals."
Dispel the energies around the monoliths. Right.

Once you agree to help, you can ask him some questions about the situation.

"When that Daedric influence is gone, it should be safe to restore the village. My poor neighbors."

Where did the Daedric influence come from?
"I don't know? I don't know.
The beasts are insidious. And we Altmer never bargain with Daedra."

What are these monoliths you mentioned?
"They're ancient. I've studied them for years in my spare time. Not even really sure who put them up. But I'm certain they're why the local creatures are normally so docile."

So the Daedric influence is in these monoliths?
"Ah. Yes. I theorize that wherever the Daedra came from, they're somehow polluting the energy of these monoliths.
Dispel that energy and—I hope—the Daedra will become powerless."

Once you have dispelled the Daedric influence from the final monolith, Merormo will appear through a portal.

Merormo: "I sensed the field disperse. I would speak with you."

"The energy subsides. But the animals are still savage monsters. We'll have to try something else.
We need a bear."
What now?
"I've spent some time studying these monoliths. I've managed to create a little magical fob that imitates their energy.
Essentially, it will make one of the ursines your furry friend. For a time."
Why do I need a furry friend, again?
"I need to—we need to—extract the Daedric energy from these beasts. To do that, we'll need a test subject.
You'll have to rough the furry fellow up a bit first. Weaken him for the spell to work."
All right. I'll collect a bear for you.
"Meet me at my tower with your friend. Just follow the road through the grove."

Once you have tamed a bear, you can meet Merormo in his tower to the west. When you enter, he will be ready to perform the ritual.

Merormo: "Ah, good. Now let's see if I can banish the Daedric influence from this creature."

The bear turns into a Flame Atronach and then explodes, leaving a burnt out husk.

Merormo: "Hmm. That should not have happened."

Talk to him again.

"This will not do. Something here is very wrong."
What was that?
"A Flame Atronach. My spell should have sent it screaming back to Oblivion.
But something else interfered."

Complete the quest and receive some gold.

Immediately afterwards, you can start the subsequent quest.

"There's a powerful Daedra nearby. I know it now. You have to kill it."
Do you have any idea where it is?
"A moment. I can feel something. There's a cave, north of here.
Whatever this monster is, dispatch it. And we can return the Grove to peace."
I'll meet you back in town as soon as I'm done.

If you talk to him afterwards, he will say, "I'll see you back in town when it's all over. Good luck."'

When you arrive at the cave, you will find one of the surviving apprentices, who will explain that it is Merormo's fault that the Daedra came to the Grove. After you have dealt with Akata, you can return to the village, where you will find Anenwen confronting Merormo.

Anenwen: "Damn it, Merormo! You coward! Statues? Restore them now!"
Merormo: "I … I'll … of course."
Anenwen: "Good. Now to make sure you don't teleport away."

Anenwen then captures him, you have the option of getting his side of the story before speaking with Canonreeve Pinanande.

"Listen, you can't tell the canonreeve. She'll kill me.
I'm not—I'm not joking. She'll have me put to a blade."
Explain yourself. Why do all of this?
"My nephew. Yandir. Went off to join the fighting and—damn it! I just wanted to stop spending our blood. My sister will never be the same!"
How can Daedra ever save lives?
"It's not just the Daedra. It's the monoliths. I've studied them for years. Worked out how the magics pacify the beasts. But that's all the magic does. It turns beasts into mewling pets. Not combat troops!"
So the Daedra were to control the animals through the monoliths?
"Yes! The Flame Atronachs are essentially just raw Daedric energy given form. I summoned some, hulled them down, and poured them into the monoliths.
That creature in the cave was not in the plan."
Thank you for being honest.

If you talk to him afterwards, he will plead, "Please. Think before you make your decision."

Talk to the canonreeve and decide Merormo's fate. If you choose him to die, he'll be sentenced to death:

Should you let him live, he'll thank you:

"Thank you. I heard what you said and—thank you."
I meant it. You were trying to save lives, right?
"I never meant for anyone to get hurt. And the lesson here is clear—Daedra are never the answer. I'll never attempt this kind of ritual again.
You probably hear this kind of thing all the time. But again, thank you, traveler."

If you speak to him after letting him live, he'll say:

"Thank you. You've spared my life. I can never repay you. But I swear on my magic, I'll never truck with Daedra again."