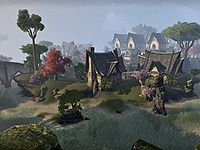 Mathiisen is a town in central Auridon, just over the western cliffs of southern Calambar. It is located southwest of Skywatch and north of Phaer. Buraniim Isle is just off the coast.

The natural beauty of the cliffs and isles around Mathiisen is well known, with the area around the settlement being dotted by magnificent Aldmeri ruins of both fortresses and ancient seaports,[1] and vast deciduous forests of laurel, maple, and larch trees to the west of the town.[2] The unwalled port is carved on the western cliffs of Auridon, open to a bay, protected from the sea, between Buraniim Isle and Skywatch.[3] The underground beneath Mathiisen is full of tunnels which lead to the sea.[4]

Elegant walled estates dot the outskirts of the town and by the sea. They were thought to be the apogee of Aldmeri architecture.[5]

The coastal settlement was most likely founded some time during the First Era as a steel-forging town.[4][6]

Prior to the Second Era, Kinlady Entila of Clan Auralus had a vivid dream that beneath the coastal cliffs between Skywatch and Mathiisen was a fabulous fist-sized gem, the Egg of the World. Based on the directions in her vision, she hired a score of miners to dig until they found it, but the funds of Clan Auralus ran out and the excavation was thereafter named Entila's Folly.[7]

During the First Aldmeri Dominion, there was a large and economically important population of Bosmer and Khajiit living in Mathiisen. They were labor immigrants from the mainland who worked on the steel forges, however, their wages were lower than the local Altmer workers.[6] 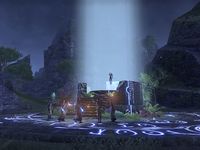 During the Planemeld, just outside the town, a Dark Anchor was summoned by the Worm Cult, however this so-called Calambar Dolmen was destroyed by the Auridon Chapter of the Fighters Guild.

In 2E 582, the then-current Forgemaster and Canonreeve were supporters of the Veiled Heritance, while they were supervised by Sergeant-at-Arms Ondenil, a high-ranking member of the organization. They used the ancient tunnels beneath Mathiisen to smuggle weapons crafted in the town's forges to the soldiers of the supremacist movement lead by High Kinlady Estre, the Veiled Queen.[8] Reports of spies linked to the intelligence of Queen Ayrenn led the Eye of the Queen to the town, where they discovered the entire plot.[9] When confronted and without escape, Canonreeve Malanie and Forgemaster Condalin did not surrender to the Crown and they were killed by the Eyes of the Queen.[10]

Even after the Veiled Heritance conspiracy in the town was suppressed by Eye of Queen agents and both the former Canonreeve and Forgemaster were replaced after their execution, the steel industry's productivity was not affected.[6][10] However, High Kinlord Rilis XIII was not happy about the town's implication in the conspiracy against the crown and decided to try to supply their First Auridon Marines with some product from Greenwater Cove, unsuccessfully, as the town was razed by the Sea Vipers of the Maormer that same year.[11][12]

A Canonreeve is tasked to rule the settlement.[13] Furthermore, a Forgemaster is intended with keeping the town's steel industry running. In Mathiisen, it is a position almost as powerful and respected by the townsfolk as that of the Canonreeve.[6]

The underground tunnels beneath Mathiisen have been used by both smugglers, criminal organizations, and insurgence movements for a variety of purposes.[4][10]

Mathiisen was a popular hideout for the nobles and wealthy of Auridon during the Second Era, who built elegant estates just outside of the town.[5]

The settlement has been always known as the origin of the best steel of all of the Summerset Isles. Weapons, tools and jewelry were crafted in the forges of Mathiisen.[14][15][8] By the time of the First Aldmeri Dominion, the town was the supplier of weapons to both the royal armies of Summerset and Valenwood.[6]