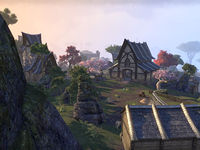 Phaer is a farming village located in southern Auridon, over the hills of Iluvamir, northwest of Silsailen and south of Mathiisen. It is built atop the abandoned halls of Ondil.

Phaer is a village built at the foot of the white granite mountains in central Auridon.[1][2] Vast flooded terraced fields of saltrice and other crops, as well as pastures extend to the south of the settlement.[3][4][1] Phaer does not have closeby access to the Abecean Sea because of the plateau's high cliffs. The river running between Silsailen and south of Mathiisen also feeds the water terraces of the village.[1]

It is unknown when Phaer was founded, but its oldest known settlement dates to the early First Era, when Kinlady Fiorallelle commanded the construction of the halls of Ondil under modern Phaer. However, these Aldmeri-style ruins were abandoned before they were finished due to its alignment with the constellation of the Atronach being found to be seven percent off true.[5]

Phaer sprang up as a mining village beside the abandoned halls of Ondil.[6] From the depths of its mine, Altmer extracted porphyry ore, however, the source of the mineral was all but exhausted by the Second Era.[7] From that moment onwards, its economy shifted towards agriculture and husbandry.[3] Their fields turned to be so productive that local Altmer peasants were insufficient and Bosmer and Khajiit immigrants began to arrive at the village to work on the fields, especially after the First Aldmeri Dominion was founded.[4]

Sometime before 2E 582, a Maormer known as Aluvus became infected by a vampire and sought refuge within the abandoned halls of Ondil under Phaer.[8] First, he began to roam the village, trying to choose a victim.[9] In time, he finally decided to satiate his hunger on the kindest Altmer of the village, the alchemist's son, Tancano.[10] Soon, Hendil discovered his son had already infected other villagers and turned the ancient mine into a quarantine zone, first using salloweed aloe to sedate both his son and the afflicted and, then, began to bring sane villagers to satiate his son's thirst for blood. He and his assistant, Amuur, made up the story about a plague.[11][12] Then, he hired a mercenary company to guard both the village and the mine to keep the villagers and outlanders from knowing the truth.[13] Some of the Altmer residents of Phaer first thought the plague was brought upon them by Bosmer and Khajiit immigrants who worked in the fields.[4] Many of those workers were the first to be infected and wandered the fields as bloodfiends.[6] Others thought it was a divine punishment against the village.[14] Finally, the Vestige, with help from Velatosse uncovered the false plague by entering the quarantine zone and killing Amuur and Tancano, and arresting Hendil, whose fate beyond that moment remains unknown.[15] Aluvus was also slain within the depths of Ondil, ending the vampiric menace.

During this period, Soulfire Plateau, Phaer's Altmer Temple to the Ancestors was desecrated by necromancers, who began to kidnap people from the roads and even killed and raised a whole unit of First Auridon Marines. The necromancers were put down by the Vestige and the holy grounds returned to peace.[16]

Following the false plague of Phaer, people from around Auridon still thought for a while that an actual plague hit the village and restricted the entry of their inhabitants to other settlements.[17] Word had soon spread across the Dominion of Hendil's deeds and the Vestige's heroic acts, with many believing Hendil to be guilty and Velatosse justified in wanting to execute him.[18]

Neither a canonreeve nor a kinlord or kinlady is tasked to rule the settlement. It appears to be a peasant village, with some local leaders, some of noble descent, but without official titles.[19][14][20][12]

Phaer's fields are very productive and need extensive labor from both native Altmer[3] and from immigrant manpower, mostly Bosmer and Khajiit, who poorly live in huts out in the fields.[4] So, Phaer's crops and livestock are heavily valued and guarded.[21]

The Soulfire Plateau serves Phaer as a collective mausoleum, where local Altmer go to honor their ancestors and to store the ashes of their deceased.[16]

The ancient porphyry mine was reconverted into a burial site for those foreign workers the Altmer bring in to do their menial labor in the fields around Phaer, because Bosmer and Khajiit do not cremate their dead.[7]